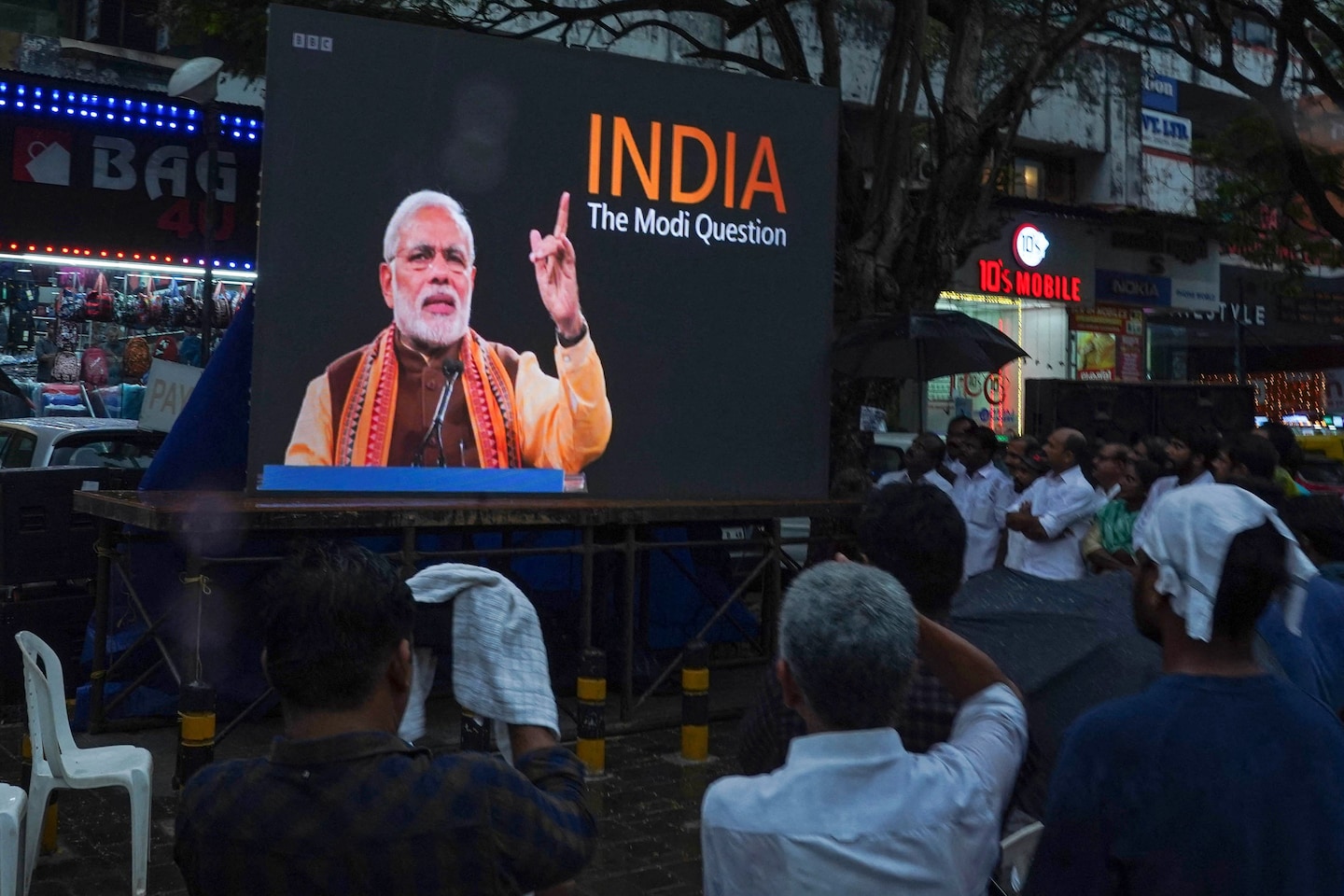 NEW DELHI — The film had already been banned, the social media posts censored. Now, the students huddled without light or electricity around glowing smartphones to watch what their government had deemed to be subversive foreign propaganda.

China? No. They were in India, ostensibly the world’s largest democracy, and watching the BBC.

The Indian government over the past week has embarked on an extraordinary campaign to prevent its citizens from viewing a new documentary by the British broadcaster that explores Prime Minister Narendra Modi’s alleged role in a deadly 2002 riot that saw more than 1,000 people — mostly Muslims — killed.

Indian officials, invoking emergency powers, ordered clips from the documentary to be censored on social media platforms including YouTube and Twitter. The Foreign Ministry spokesman lambasted the BBC production as a “propaganda piece” made with a “colonial mind-set.” One junior minister from Modi’s Bharatiya Janata Party (BJP) declared that watching the film amounted to “treason.”

How bulldozers in India became a symbol of Hindu nationalism

On Tuesday evening, authorities cut electricity to the student union hall at New Delhi’s prestigious Jawaharlal Nehru University in an attempt to prevent the film being screened — a move that only provoked defiant students around the country to try to host more viewings.

When students at another college in the Indian capital — Jamia Millia Islamia University — announced their own plans on Wednesday to view the film, Delhi police swooped in to detain the organizers. Ranks of riot police armed with tear gas were also dispatched to the campus, according to witnesses and smartphone photos they shared.

All told, the remarkable steps taken by the government seemed to reinforce a central point of the BBC series: that the world’s largest democracy was sliding into authoritarianism under Modi, who rose to national power in 2014 and won reelection in 2019 on a Hindu nationalist platform.

Raman Jit Singh Chima, Asia Pacific policy director of the digital rights group Access Now, said the episode should “give more attention” to the “dangerous situation” of eroding civil liberties in India. The government has become “far more efficient and aggressive” in blocking content during moments of national political controversy, he said.

“How is it acceptable for India, as a democracy, to be ordering such a large amount of web censorship in the country?” Chima said. “You have to look at this incident as part of a cumulative wave of censorship.”

The controversy kicked off on Jan. 17, when the BBC aired the first part of its two-part documentary, “India: The Modi Question.”

In the hour-long first segment, the BBC focused on the Indian leader’s early career and his rise through the influential Hindu nationalist organization, the Rashtriya Swayamsevak Sangh. It focused on his tenure as leader of Gujarat, a state that burst into violence in 2002 following the murder of 59 Hindu pilgrims in a train fire. The killings were blamed on Muslim perpetrators, and Hindu mobs retaliated by rampaging through Muslim communities.

In its documentary, the BBC uncovered British diplomatic cables from 2002 that likened the paroxysm of murder, rape and destruction of homes to an “ethnic cleansing” of Gujarat’s Muslims. British officials also concluded that the mob violence was preplanned by Hindu nationalist groups “under the protection of the state government” and further suggested that Modi was “directly responsible” for the “climate of impunity” that led to its outbreak, according to the documentary.

While the film disclosed the existence of the diplomatic cables for the first time, it did not level any groundbreaking allegations against the Indian leader. For two decades, Modi has been trailed by criticism that he allowed the riots to rage on, and it was in 2013 that an Indian Supreme Court panel ruled there was insufficient evidence to prosecute him.

In 2005, the State Department denied Modi a U.S. visa due to his alleged role in the riots — although he was later welcomed by successive U.S. administrations who viewed him as a linchpin to American foreign policy in Asia.

Modi has consistently denied any wrongdoing related to his handling of the 2002 events.

The documentary was aired last week only in Britain and not in India, but the Modi government’s response has been swift and vehement.

Indian Foreign Ministry spokesman Arindam Bagchi lashed out at the BBC for producing “a propaganda piece designed to push a particular discredited narrative.” He accused the broadcaster of maintaining a political agenda and a “continuing colonial mind-set.”

An adviser to the Indian Information and Broadcasting Ministry, Kanchan Gupta, also announced that that ministry had issued a directive under a 2021 law to censor all social media posts sharing the documentary.

“Videos sharing BBC World hostile propaganda and anti-India garbage, disguised as ‘documentary’ on YouTube, and tweets sharing links to the BBC documentary have been blocked under India’s sovereign laws and rules,” Gupta said in a tweet. He added that both YouTube and Twitter, which was recently acquired by Elon Musk, have complied with the orders.

In a statement, the BBC said its documentary was “rigorously researched” and the Indian government declined to offer comment for the piece.

Tracking rising religious hatred in India, from half a world away

By the weekend, Indians could only share the film on Telegram, an encrypted messaging app, and watch copies stored on cloud services or on physical thumb drives.

On Tuesday evening, students gathered at New Delhi’s Jawaharlal Nehru University for a widely advertised 9 p.m. showing, defying warnings by university administrators to cancel the event or face disciplinary action. Hundreds of students flocked to the student union, only to be foiled 30 minutes before the scheduled time when the electricity was cut, plunging the hall into darkness, said Anagha Pradeep, a political science PhD student.

Instead of viewing the documentary on a projector, they shared links to download the film on their phones to watch as a group, she said.

Shortly after that, students were attacked by members of the youth wing of the RSS Hindu nationalist group, Pradeep said. University administrators blamed the power outage on a faulty electrical line, according to local media.

By Wednesday, student groups from Kerala in southern India to West Bengal in the east had announced their plans to host viewings. At Jamia Millia Islamia University in Delhi, administrators stopped all unauthorized gatherings after police detained several students for planning to screen the documentary, local outlets reported.

Aishe Ghosh, the leader of the JNU student union, said that the pushback from campuses showed India was “still breathing [as] a democracy.”

“What is the problem if a large number of Indians see it?” Ghosh said by telephone on Wednesday from inside a subway stop where she was hiding to avoid arrest.

“They will see through the propaganda if it exists,” she said. “What we get is more and more censorship.”