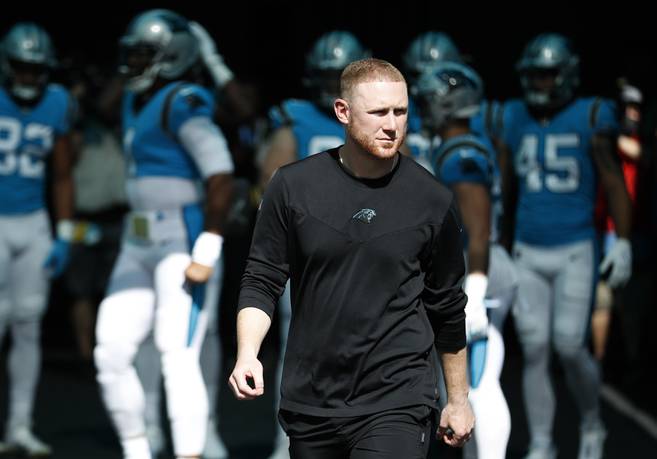 Now, with uncertainty swirling around quarterback Lamar Jackson’s future in Baltimore, coach John Harbaugh will have to find a new play-caller for the first time since January 2019.

Brady was a rising star when he joined Matt Rhule’s Carolina Panthers staff as offensive coordinator in 2020. He’d won the Broyles Award the year before at LSU, honored as college football’s top assistant coach for his work as the Tigers’ passing game coordinator and wide receivers coach. Led by quarterback Joe Burrow and wideouts Ja’Marr Chase and Justin Jefferson, LSU went 15-0, won the national title and averaged 48.4 points per game, rolling over defenses with a spread attack bolstered by West Coast offense concepts.

In Carolina, Brady struggled to replicate his success with Teddy Bridgewater, Cam Newton and Sam Darnold. His play-calling inexperience also showed; the Panthers finished 21st in offensive efficiency in 2020, according to Football Outsiders, and were 31st when Brady was fired in December 2021. Bridgewater later criticized Brady and the franchise for how little the offense prepared for hurry-up and red-zone situations.

Brady landed last offseason in Buffalo, where he’s helped Josh Allen and offensive coordinator Ken Dorsey overcome the departure of Brian Daboll. The Bills finished the regular season behind only the Kansas City Chiefs in passing efficiency, according to Football Outsiders, their highest rank since Allen’s arrival.

In his 13 years as a play-caller and position coach, Johnson has helped develop two of the NFL’s best quarterbacks: the Eagles’ Jalen Hurts and Dallas Cowboys star Dak Prescott. Hurts emerged as a league Most Valuable Player front-runner in his second year working with Johnson, while Prescott, a three-star recruit in high school, earned All-Southeastern Conference honors at Mississippi State in his final two years with him.

Johnson also has experience as a coordinator; the 2020 Florida spread offense he coordinated finished fourth nationally in efficiency, according to ESPN’s Football Power Index.

Get notified of need-to-know
info from The Banner

Martin, who joined the Ravens’ staff as wide receivers coach in 2021, struggled to sustain his early success at USC over three seasons as coordinator. The Trojans’ offense fell from 12th in offensive efficiency in 2016, according to ESPN’s FPI, to 24th to 67th.

Godsey, who was hired as tight ends coach last offseason, oversaw Texans offenses that finished 25th and 30th in overall efficiency, according to Football Outsiders, from 2015 to 2016. The Dolphins, meanwhile, ranked 24th in his one year as co-coordinator.

Monken is coming off one of the most dominant showings in bowl history: a 65-7 win over Texas Christian in the College Football Playoff national title in which Georgia recorded 589 yards, 32 first downs and nine touchdowns. The Bulldogs finished the season ranked second nationally in offensive efficiency, according to ESPN’s FPI, for the second straight year.

Even more impressive, Monken’s turned Georgia into an offensive powerhouse without overpowering talent. The Bulldogs had two offensive players taken in the top 100 of last year’s draft, and they have only three players ranked among ESPN’s top 100 prospects entering this year’s draft. Quarterback Stetson Bennett, the Most Valuable Player of the CFP national title, is a former walk-on who’s expected to be a later-round pick.

Monken’s Georgia offenses, like Roman’s in Baltimore, have leaned on their talented tight ends and overpowering running games. But before heading to Georgia in 2020, Monken also coordinated productive NFL aerial attacks that relied heavily on three-wide-receiver formations. From 2016 to 2018, Monken’s three seasons as Tampa Bay’s offensive coordinator, the Buccaneers never finished worse than 11th in passing efficiency, according to Football Outsiders. And that was with Jameis Winston and Ryan Fitzpatrick as their top quarterbacks.

Reich is in the mix for a handful of head coaching vacancies, having already interviewed with the Arizona Cardinals and Carolina Panthers. But the former Maryland star has also emerged as a potential offensive coordinator candidate for the Los Angeles Rams and Los Angeles Chargers.

Reich served as offensive coordinator of the San Diego Chargers from 2014 to 2015 and of the Philadelphia Eagles from 2016 to 2017. He helped Eagles quarterback Carson Wentz earn second-team All-Pro honors in only his second NFL season, then kept Philadelphia’s offense on track with backup Nick Foles through their Super Bowl run.

Reich went 40-33 as Indianapolis’ head coach, leading the Colts to two playoff appearances in four-plus seasons but struggling to produce elite offenses after the retirement of quarterback Andrew Luck. Indianapolis’ offense blended concepts from systems across the league and relied on tight ends and pace to gain advantages against opposing defenses.

Slowik could be the next big name to come out of the Kyle Shanahan coaching tree. Shanahan doesn’t have an offensive coordinator this season, so he relies on two two quasi-coordinators: Slowik for the passing game, and Chris Foerster for the running game.

Despite cycling through three quarterbacks, including seventh-round pick Brock Purdy over the second half of the season, the 49ers finished the year ranked third in the NFL in passing efficiency, according to Football Outsiders.

Their passing offense, built around Shanahan’s wide-zone scheme and bolstered by maybe the NFL’s most talented group of skill players, helps put playmakers in space after the catch. Jimmy Garoppolo ranks first in the NFL in yards after the catch per completion (7.0), according to Pro Football Reference, while Purdy would rank third (6.2).

Bobby Slowik is the son of Bob Slowik, a former NFL defensive coordinator. Before joining the 49ers’ staff in 2017 as a defensive quality-control coach, he worked as an analyst for Pro Football Focus.

Jim Harbaugh’s Michigan program was a proving ground for Mike Macdonald, a former Ravens assistant coach who helped turn around the Wolverines’ defense in 2021 before returning as coordinator Don “Wink” Martindale’s replacement last year. Now Weiss could find his way back to Baltimore, too, where he worked for over a decade as a support staff member and assistant coach.

Weiss, an assistant quarterbacks coach with the Ravens for two seasons, has also helped steady the Wolverines’ quarterback rooms. Cade McNamara earned third-team All-Big Ten honors in 2021, and J.J. McCarthy earned second-team all-conference honors as a sophomore this past season.

Recent legal troubles could complicate Weiss’ candidacy, though. He’s been placed on leave, according to Michigan’s athletic department, as the school’s police department investigates a “report of computer access crimes” that occurred in December at the team’s football facility.