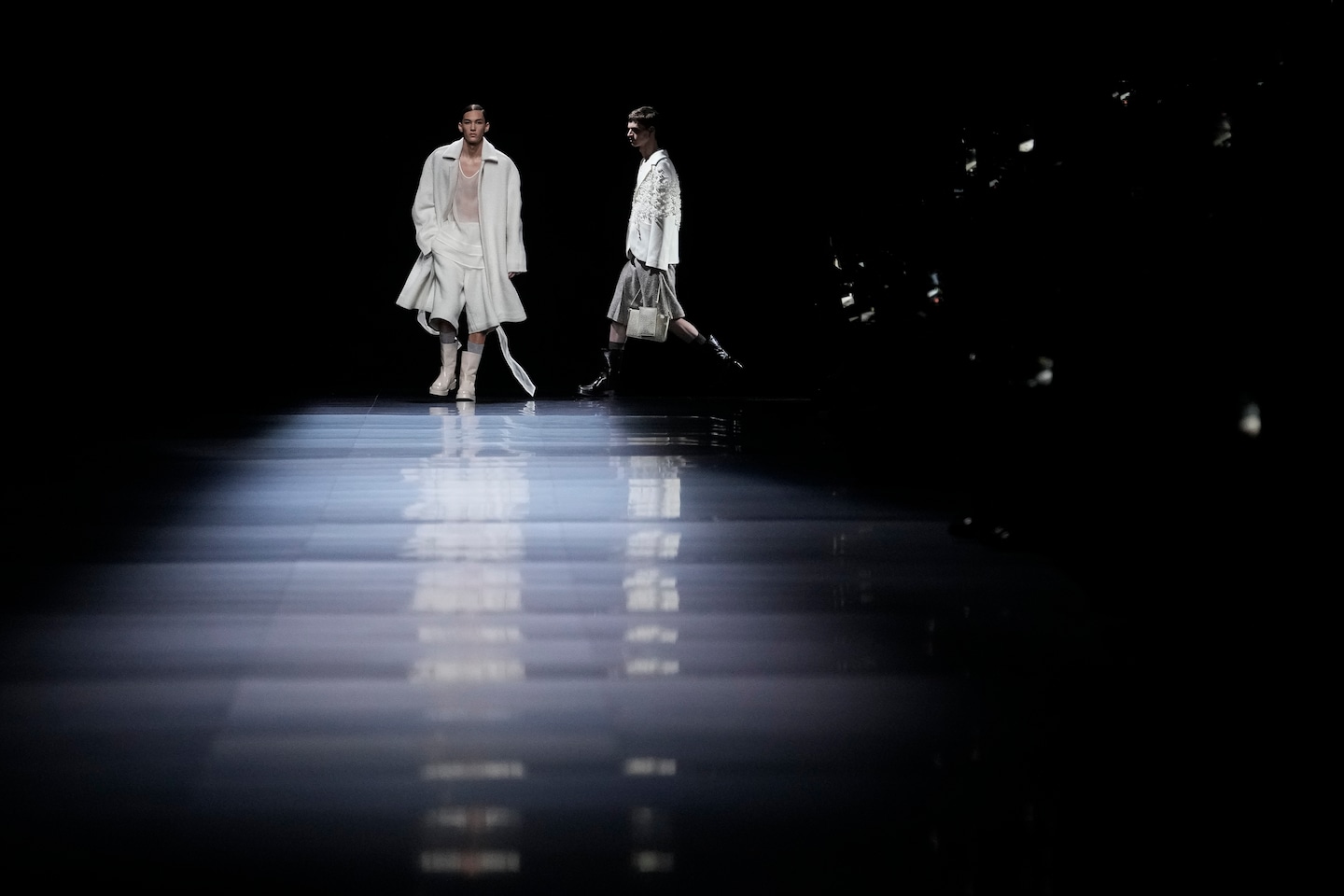 PARIS — Dior mania descended on Paris Fashion Week menswear Friday as over a thousand screaming fans thronged the magnificent Place de la Concorde for a glimpse of their favorite stars, with some almost risking their lives in snarled traffic.

Here are some highlights of fall-winter 2023-2024 collections:

In 1958, Saint Laurent unveiled his first collection for Christian Dior. It was a global event which saw the 21-year old draw thousands upon thousands of screaming fans who thronged avenues. Some things never change, even in 65 years.

Kim Jones used that women’s collection as the inspiration for his men’s — mirroring its contrasts of masculine versus feminine and British tailoring versus couture.

Jones also captured its fluidity to produce a gender-neutral display with softened shapes and loose waists. Unbuttoned suits that unfurled cut a nice trapeze silhouette, as did clever white knit sweaters with sleeves snipped away to flap like a poncho.

Jones did his homework. In Saint Laurent’s debut, he famously abandoned Dior’s cinched waists and lengthy fabrics in favor of more fluid shapes in which the body disappeared, inventing the trapeze silhouette.

Some Jones styles, like an update marine sailor top, were lifted directly from the 1958 archive.

But this sublime show was much more than mere homage. Three-dimensional printed shoes followed contemporary sheer organza vests with tiered banding, and looked aggressive yet feminine. Off the shoulder tailoring on one embellished pearl coat simultaneously evoked a slouchy rebel and an opening flower.

But even the cool Christie, star of both Dior show and “Game of Thrones,” seemed overwhelmed when journalists ditched her in a split second upon the arrival of BTS’s Jimin, who recently was announced as Dior brand ambassador.

Smith delved into the history books for a thoughtful display that seemed to merge London from the 1970s with the city in the 1870s.

A quilted coat with checked cape demonstrated this perfectly. It flared out at the back looking as if it were fashioned on Baker Street and could have been worn by Sherlock Holmes if it came with a pipe.

Elsewhere, a high white collar had a prim 19th century feel, while a dark velvety coat with a big collar sported a beautiful textured thickness.

Such old-fashion musing gave fall-winter a more austere style than usual, but it was a welcome change.

The best looks were ones that fused the two eras, such as a loose cerulean trench coat with voluminous layers, twinned with a striped blue silk foulard.

If there was an overarching theme in Botter’s ever-creative and eccentric show, it surely was the haphazard.

A blue bikini was sewn humorously atop a shimmering satin shirt-dress. A suit jacket’s outer layer peeled off to reveal a snakeskin-like underlayer. A mermaid look featured a salmon printed on a tight vest descending to a rippled metallic satin skirt “tail.” A neon-pink knit sweater placed on the front of another sweater was surely a swipe at how cold the Paris weather has been of late.