US climate envoy John Kerry said Europe should boost its spending to expand clean energy options and deal with climate change, in a defence of Washington’s green subsidies delivered at the World Economic Forum in Davos.

The $369bn of clean energy and climate provisions included in the Inflation Reduction Act have drawn the ire of US trading partners and allies, who argue that the billions of dollars of tax credits aimed at scaling up and rolling out green technologies across the US discriminate against foreign companies.

“Our point of view is that we need more of it,” Kerry said on Wednesday, referring to the US’s green subsidies. “Europe already spends an enormous amount of money, but let’s go folks. All of us need to be doing more.”

The EU, South Korea, Canada and the UK are among those to claim the act breaches World Trade Organization rules by tying aid to US domestic production.

A specific area of concern is a provision offering a $7,500 subsidy for electric vehicles made with parts from and assembled in North America.

The raw materials for batteries would need to be sourced from countries with a free trade agreement with the US, excluding the EU and UK, although in December the Treasury suggested that the definition of “free trade agreement” could be broadened to include a wider range of countries.

EU and US officials have formed a task force to try to shape the law as it is implemented by the US Treasury and the Internal Revenue Service, the US tax authority. US allies hope that grey areas in the language of the bill can be interpreted by Treasury officials to soften the impact on foreign businesses.

But Kerry said that while the US would work with allies over their concerns, “the basics of the legislation” were “exactly what we need”.

Kerry previously hit out at trading partners who had criticised Washington’s climate spending bill as discriminatory. “The reaction shouldn’t be ‘oh my God, you shouldn’t be doing that, you’re putting us in an unfair position’,” he said on Tuesday. “Do it! Everybody’s got to do the same thing to accelerate this process even more.” 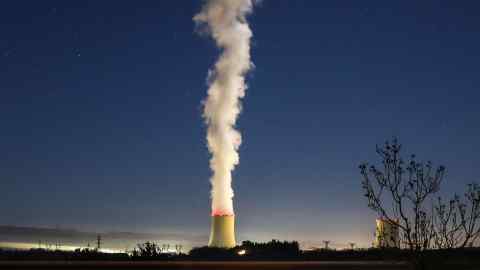 Ursula von der Leyen, president of the European Commission, told chief executives in Davos on Tuesday that Brussels would aim to temporarily water down state-aid regulations in an attempt to speed up the approval of subsidies to green industry. However, the plan would need the backing of member states.

Katherine Tai, US trade representative, on Wednesday said at Davos that the world was moving towards “a new version of globalisation”, and that the US would pursue trade policies that “promote resilience, sustainability, not just for the planet, but also for people and inclusiveness”.

Are you curious about the FT’s environmental sustainability commitments? Find out more about our science-based targets here

Read More: John Kerry says Europe could do more to match US on green spending