USC President Carol L. Folt announced the university is naming the field at one of its landmark sports facilities in honor of Allyson Felix. Felix is an alumna and Olympian who has been a hero both on and off the track, earning the most Olympic medals of any track athlete in U.S. history.

“When Allyson and I spoke about naming the field after her, she responded with the grace and humility she has shown throughout her life,” Folt said. “The Allyson Felix Field will recognize her immense achievements as a sports legend and Trojan — while also showing our admiration for her role as an entrepreneur, advocate and champion for women.” 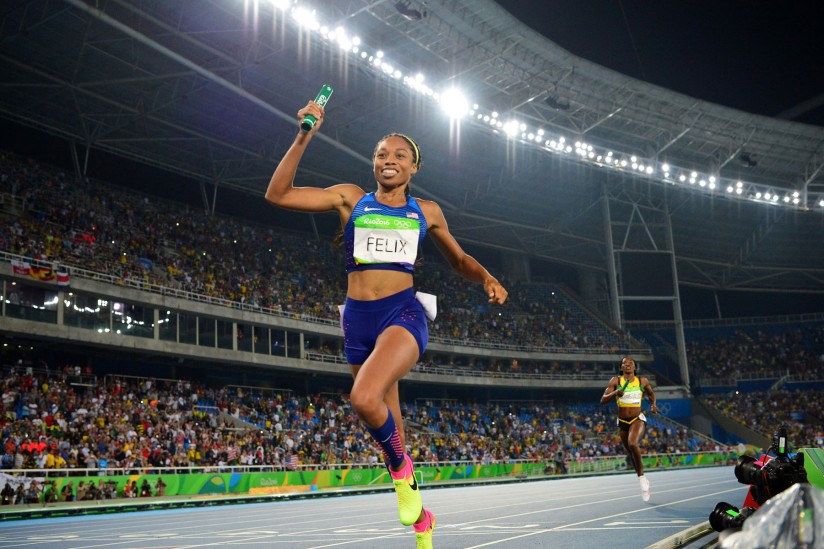 Felix — an Olympic sprinter, successful innovator and proud mother — said the naming pays tribute to her ties to both the university and her hometown. As a little girl, she used to take walks on the campus with her grandmother and older brother. He went on to graduate from USC, and she followed in his footsteps.

“For me to be born and raised in Los Angeles and have such a history at USC, I am just completely humbled,” she said. “It’s such a huge honor to be a part of history in the campus, and it’s such a special place for me.”

The field sits at the center of Katherine B. Loker Track Stadium, which serves as a hub for the men’s and women’s track teams and also groups such as ROTC, the Trojan Marching Band and recreational sports.

“Allyson is the most decorated Track and Field Olympian in U.S. history and an inspiration to generations of Trojans,” Folt said. “My hope is that students playing on the Allyson Felix Field — or just walking by — will see her name prominently displayed and be curious to learn more about her talent, grit and generosity.”

Felix was already a professional runner when she began attending USC. While working on her undergraduate degree in education, she began her successful tenure at the World Championships. She would eventually earn the title for most decorated athlete at the championships with 20 medals, seven from individual events and 13 from team relays. With her 11th medal — gold in a stunning 4×400 meter win at the 2020 Summer Olympics in Tokyo — Felix broke her tie with Carl Lewis as the most decorated American track and field athlete in Olympic history, with medals earned at five consecutive Olympic Games.

In addition to that success, Felix has been an advocate for women and the issues facing athletes of color in and outside of sports — including unequal conditions in contract negotiations — after personal circumstances opened her eyes to major injustices. Becoming a mother would prove to be another powerful spark for Felix and the inspiration behind her advocacy for supporting maternal health.

Allyson is the ultimate Trojan.

Paula Cannon, an associate professor of microbiology at the Keck School of Medicine of USC who has led the naming committee for the university, said that Felix has proven herself as a valued member of the Trojan Family.

“Allyson is the ultimate Trojan,” Cannon said. “She graduated with a degree from [the USC Rossier School of Education], crushed it at multiple Olympics and international competitions, and bravely stood up for what she knew was right when her employer did not. It will be so wonderful that the field she walked around as a little girl from the neighborhood will be named in her honor.”

Felix said she encourages fellow Trojans to also speak up about the issues they believe in, even when it’s difficult to do so. 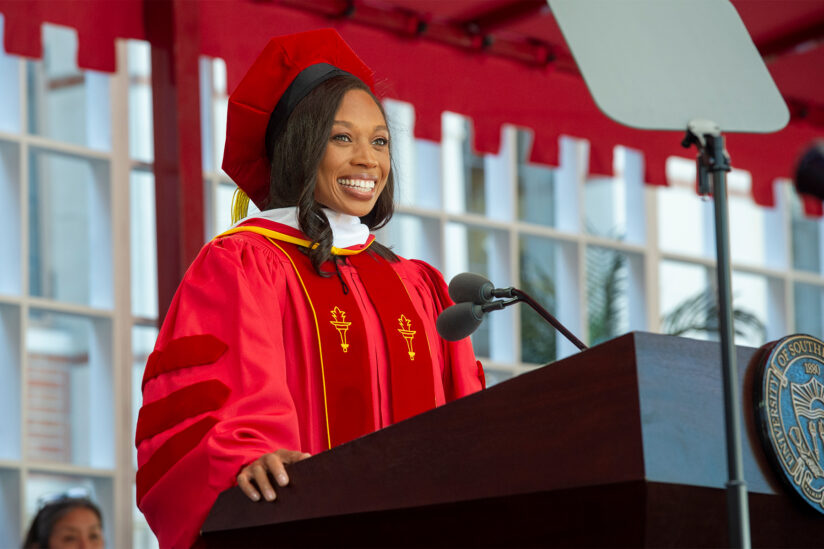 “I’m by nature a more reserved, shy person; I don’t usually want to rock the boat,” Felix said. “But it was my brother who said, ‘You know you can use your voice, even if it shakes,’ and that really resonated with me.”

“We’re incredibly honored and excited to recognize one of our greatest ambassadors and the most decorated U.S. track and field athlete of all time,” said USC athletic director Mike Bohn.

Felix, now retired from track and field, believes the reasoning behind this renaming — an honor usually reserved for major donors — makes it even more special. “To have discussions about the renaming [of the track] because of my character, my integrity and for fighting for women is something that doesn’t happen,” Felix said. “It just really shows what USC values. I feel proud of the things that I’ve stood for, and it makes me proud to be an alumna because of the direction that the school is going.”

The university plans to hold a formal dedication of the newly named Allyson Felix Field in the spring. 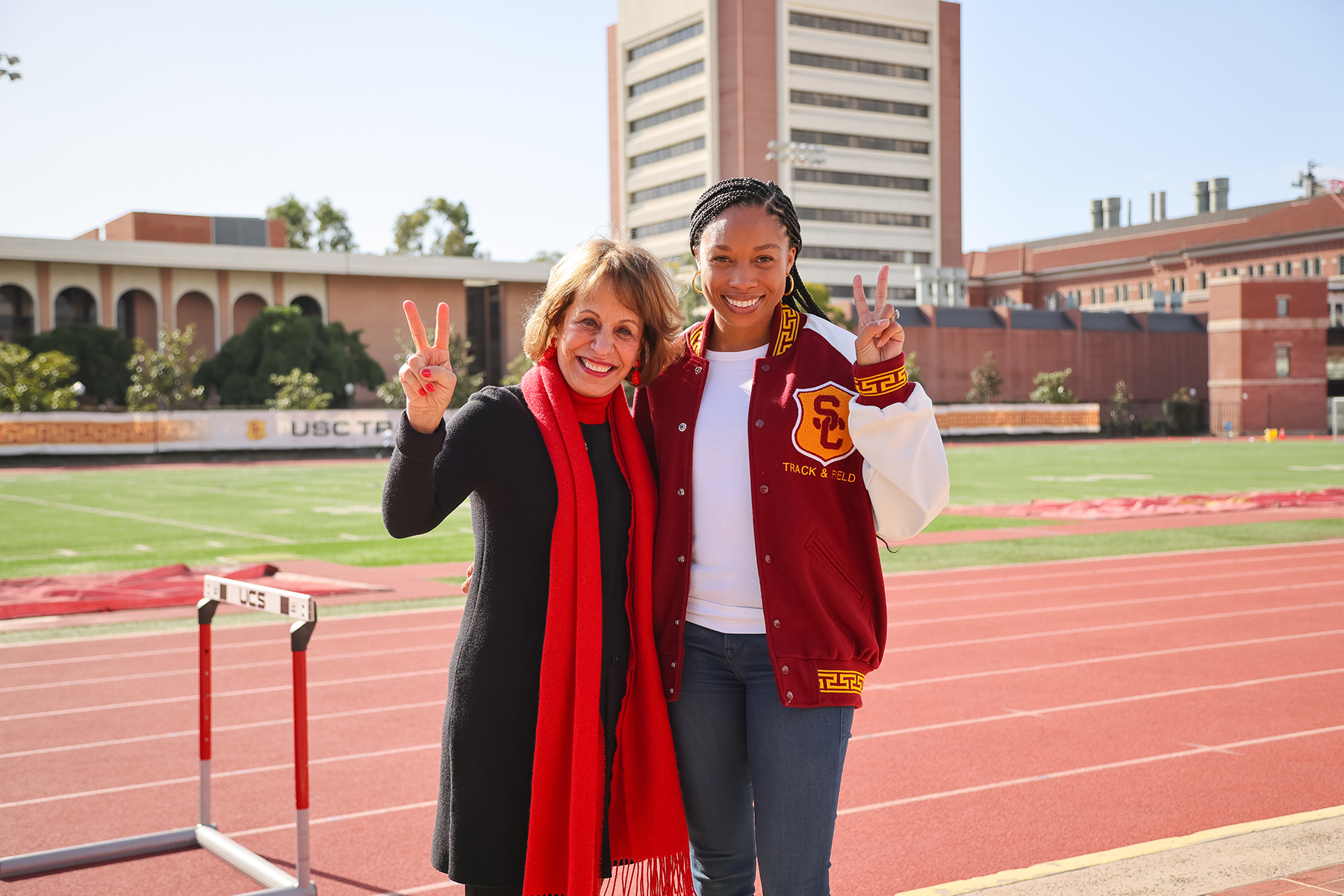