Home » ‘We are not your enemy’, say South Korean truckers striking for minimum wage protections

‘We are not your enemy’, say South Korean truckers striking for minimum wage protections 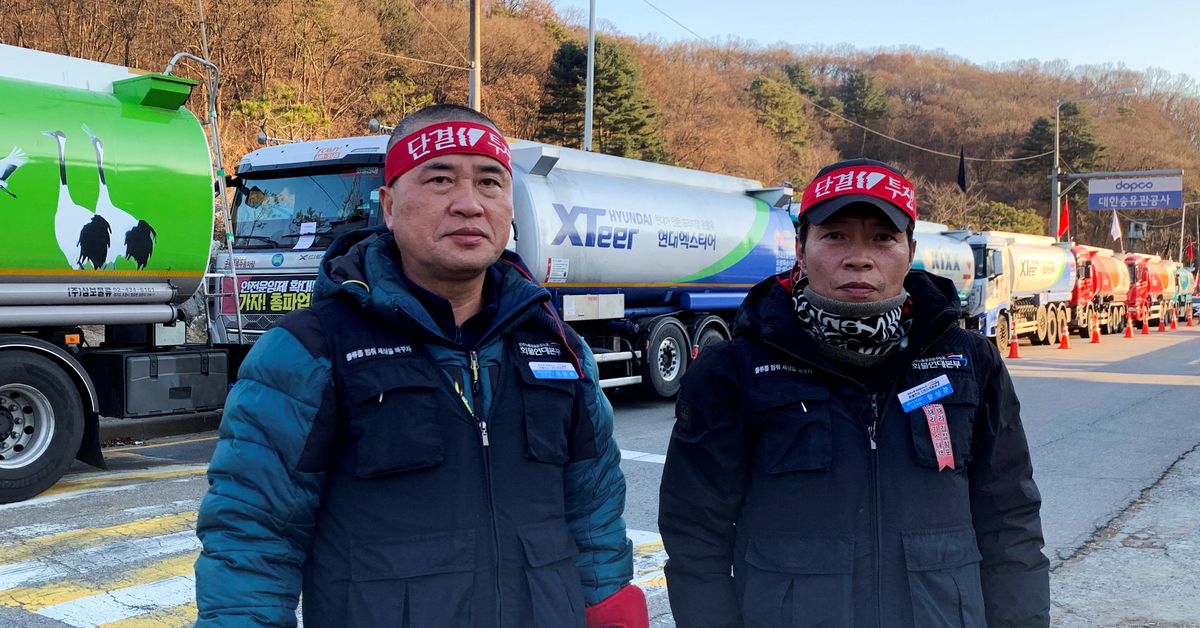 UIWANG, South Korea, Dec 5 (Reuters) – Inside five white tents outside the Uiwang container depot near Seoul, about 200 striking truckers huddle around gas heaters, trying to fight the bitter cold and the government narrative that they are well paid “labour aristocracy.”

They are all too aware of the impact their strike has had on South Koreans at a time of record inflation. But these drivers, and tens of thousands of others striking across the country, say their calls for stronger minimum pay protections are all that stand between them and poverty.

“We are not the enemy. We are loyal to our country, because we are contributing to exports,” said Kim Young-chan, a 63-year-old container truck driver transporting exports such as home appliances and cosmetics between Uiwang and Busan port. “Our money is stretched to eat and live for a month. Labour aristocracy? That is nonsense.”

Amid soaring fuel costs, as many as 25,000 truckers are calling on the government for a permanent minimum-pay system known as the “Safe Freight Rate”, which was introduced temporarily in 2020 for a small portion of the more than 400,000 truckers.

President Yoon Suk-yeol has said his administration would not give in to what it calls “unjustified demands” by the truckers union as the second major strike in less than six months disrupts supplies of cars, cement and fuel. The interior minister and a ruling party spokesperson have both called the truckers “labour aristocracy”.

Pale and unshaven, the drivers venture out of their tents a couple of times a day to chant slogans and hand out leaflets.

Kim said high diesel prices mean their lives are no better than in June, when they went on an eight-day strike. He earns about 3 million won ($2,300) per month, far less than last year because diesel prices have nearly doubled.

The country’s consumer prices also jumped 5% in November compared with a year earlier.

Kim said it broke his heart that his wife, who is past retirement age, must work to support the family, mopping floors and cooking for pay.

“Maybe our life can be better if freight rates are stable,” he said.

The government and the union have sat down for talks twice but remain far apart on two key issues: extending the minimum pay rules beyond the end of this year and expanding them to benefit more truckers.

The government has specifically said it will not expand minimum pay protection to truckers in the fuel and steel industries, saying they are already well paid.

Concerns are mounting over shortages of petrol and pricier groceries causing economic pain.

Lee Ji-eun, 36, a physician and mother of two, said she hurried to fuel up her car on Thursday over shortage fears.

“I want the government and the truckers to reach a deal as soon as possible. Strikes like this or by subway workers or public officials – that damage is done straight to ordinary people like me,” Lee said.

Early in the strike, near a major oil storage facility that supplies petrol stations in Seoul, a dozen striking tanker drivers had positioned their trucks to hamper traffic. On Thursday, they stopped after residents complained.

“I know people are getting cold about this strike, and they are like, ‘Why again?'” said Ham Sang-jun, 49, a driver transporting oil from top refiner S-Oil Corp (010950.KS) to petrol stations.

As of mid-Friday, 60 petrol stations had run dry, the industry ministry said. Stations nationwide had an average of about a week’s supply, as they had secured stock before the strike. read more

Along with Ham, about 90% out the 340 tanker drivers contracted to supply S-Oil’s products have walked off the job, according to Lee Geum-sang, their union leader.

Their families worry they lose their jobs.

Ham, the father of two teens, earns about 3 million to 4 million won a month working 12 hours a day, five days a week, often overnight and weekends. That is 2 million won less than last year because of fuel costs.

“I am sorry to my wife and children, because I am not a good father,” he said. “But we have to keep up the strike for a better future 10 years ahead.”

Read More: ‘We are not your enemy’, say South Korean truckers striking for minimum wage protections