IRELAND WOMEN’S 7S coach Aiden McNulty is leading his players in a session on the indoor pitch at the IRFU’s high performance centre on the outskirts of Dublin.

First, the Irish players work in a one-on-one drill in a small grid where the attacking players are encouraged to entice defenders where they want them to go. Equally, defenders are pushed to send attackers where they can manage them best. McNulty is big on his team “dictating” to opponents.

After a quick break, McNulty brings his squad into a full-pitch session of seven against seven where it’s all about off-the-ball work. “What’s coming next,” shouts McNulty as they play. “What are you seeing, how are you going to be in charge?” His message is about players being multiple steps ahead.

Down the other end of the pitch, there’s a separate 7s development squad working on similar stuff with women’s performance pathway coach Katie Fitzhenry. Ireland men’s 15s coaches Greg McWilliams and John McKee are watching on too, ready to bring the newly-contracted 15s players out for a session when the 7s are finished.

For McNulty, it’s ideal having the roof over their heads as they prepare for the opening leg of the World Series in Dubai in two weekends’ time.

“It’s a bit greasy outside, so what was the purpose of the session? Well, to prepare them for Dubai, to get them feeling confident, clear, calm about what we are going to do,” explains McNulty, who previously worked in the Ulster academy set-up.

“Do I want to go outside and risk some stressful situations where the ball is getting dropped all the time?” 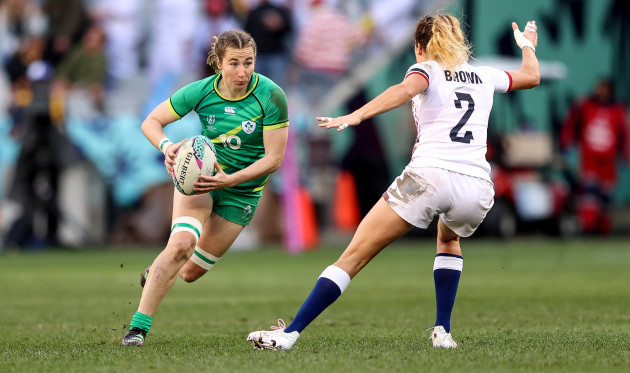 Eve Higgins will be important again this season.

In a regular week, Monday is a speed and skills day, while Tuesday is usually a ‘Unite’ day where they’re in the gym and out on the pitch. It also means they do sessions in a meeting room where they talk about what it means to play for Ireland and “get vulnerable” with each other.

“We’re all seeing in high performance at the moment that it’s around connecting,” says McNulty.

“Caring is the word. Why do teams hold other teams out on their own line for 10 or more phases? I don’t think it’s technical or tactical, I think it’s actually caring. That’s my opinion. It comes back to do I care or not?”

Sometimes they run ‘Excite’ days where it’s all about individual growth for the players, be it tactical understanding or lineout work.

Thursdays are ‘Fight’ days which replicate tournaments. The players are put into teams, scores are kept, and it’s a double session on the pitch. When there’s no competition on, the players are out of camp for the weekends.

This weekend, though, they fly to Dubai ahead of the women’s World Series kicking off on 2/3 December. There will be a development squad travelling too.

Ireland have high hopes for the season ahead. They finished fourth on the Series last time around and a similar outcome this season would secure them qualification for the 2024 Olympics – which is now the major goal for women’s and men’s 7s in Ireland.

The full-time return of New Zealand to the circuit will make things more competitive but Ireland showed their ever-growing quality last season. And they’re motivated to bounce back from an underperformance at this year’s World Cup, where they finished seventh. 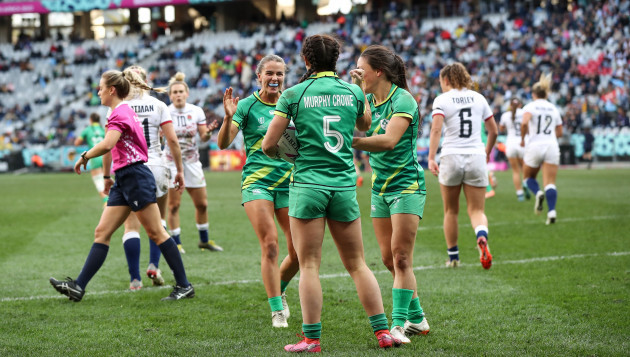 “I think there is an excitement because they were disappointed in their performance in the World Cup,” says McNulty.

There was a detailed review into that campaign as staff and players provided feedback which honed in on specific aspects of their game.

“One thing was the contact area,” says McNulty. “We have done a lot of looking at how we tackle and how we evade tackles and then what is the consequence and the reward of getting that right. If I hit you and drive you there, what’s the knock-on effect to their attack but also our defence?

“That’s one part of it. The second part is our systems. How do we force teams to go where we want them to go? We kept that all the way through pre-season.”

The men’s and women’s squads for Dubai are due to be announced on Monday and while Ireland have had some new faces in over pre-season, there should be a fairly settled look to McNulty’s group.

“You want them to have a breadth and depth of experience which they can call on in tough times,” he says. “7s is a game where you have to be comfortable in hanging out with people, being in each other’s company and on the journey together.

“Getting them connecting again is important. They also have this disappointment of how they performed at the World Cup.”

A big season that earns Olympic qualification would put that right.

Get instant updates on your province on The42 app. With Laya Healthcare, official health and wellbeing partner to Leinster, Munster and Connacht Rugby.