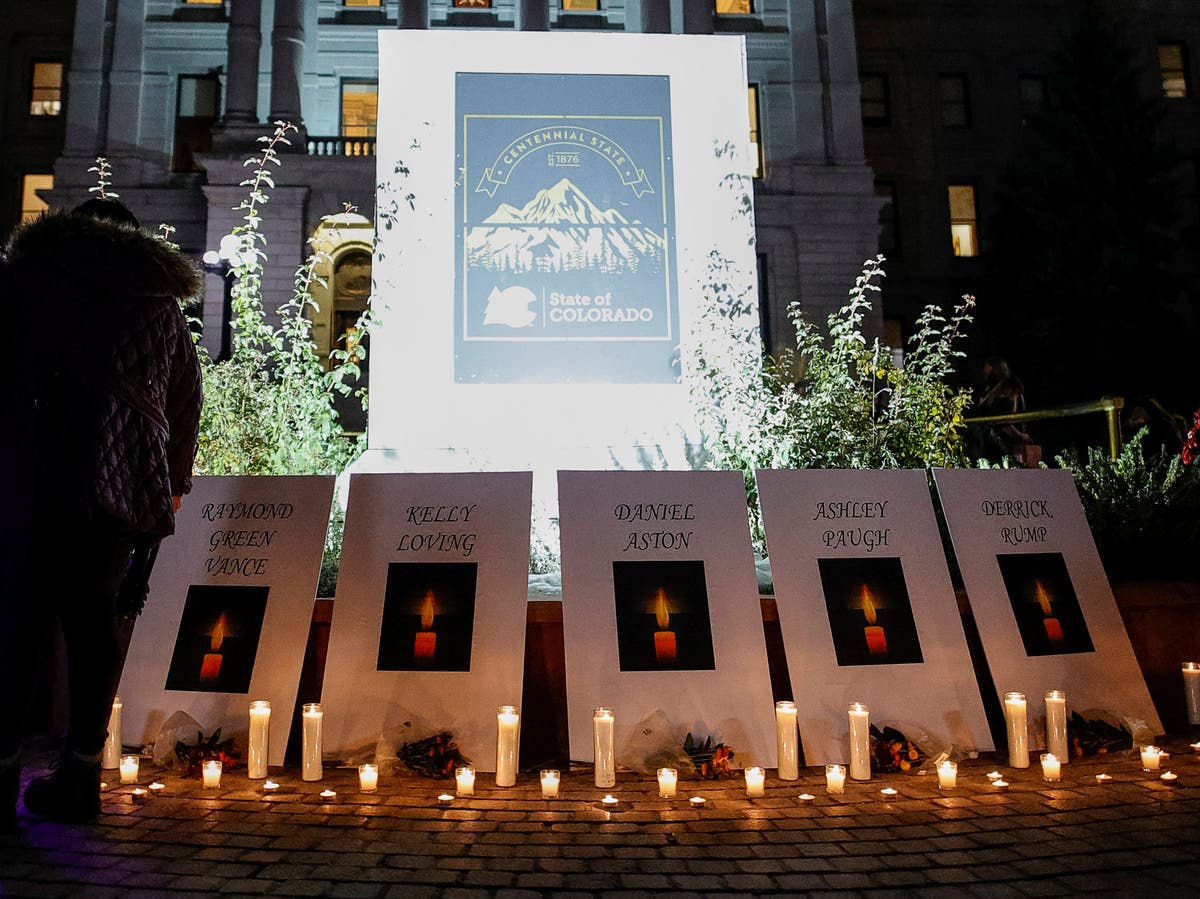 Sign up to our free morning US email news bulletin

Colorado Springs shooting suspect Anderson Lee Aldrich wanted to be the “next mass killer” and go out “in a blaze”, according to past arrest records.

Aldrich, who allegedly identifies as nonbinary, is now facing preliminary charges including five counts of murder along with five charges of committing a bias-motivated crime causing bodily injury following a mass shooting inside LGBT+ nightclub Club Q. The suspect will remain jailed without bond.

Booking photos reveal several bruises and other apparent wounds to the suspect’s face and neck.

One year before the the massacre, Aldrich was arrested for making an alleged bomb threat. No charges were filed, and the case was sealed.

Records have surfaced showing that the accused shooter’s grandmother told police that they said they were “going to be the next mass killer and has been collecting ammunition, firearms, bullet-proof body armour and storing it in the basement of the residence”.

‘Why the hell can’t America end this deadly gun violence?’

There are 400 million firearms in US and they being used to kill people at a rate not seen in any other nation in the world, The Independent’s Andrew Buncombe writes:

He told the CBS8 his family were Mormon, adding: “We don’t do gay.”

The father said that while he holds anti-gay views, there’s no excuse for his child allegedly shooting people in an LGTBQ+ club.

“I’m so sorry guys for your loss,” Mr Brink said. “With no regard to politics, it’s human life. I’m so sorry. My soul goes out to you.”

“Life is so fragile, and it’s valuable,” he said. “Those people’s lives were valuable.”

Aldrich’s lawyers have said in court documents that the 22-year-old is non-binary and uses they/them pronouns.

Bevan Hurley has more details from the interview here.

The father of Colorado Springs shooting suspect Anderson Aldrich says his first reaction to being informed of the attack at Club Q was to question why his child was at an LGBTQ bar.

“They started telling me about the incident, a shooting involving multiple people,” Mr Brink said in an interview.

Watch the full interview with CBS 8 below.

More than 20 local breweries in Colorado Springs will be pooling resources for a day-long fundraiser, with a portion of tabs going towards providing financial support for the victims and survivors of the Club Q mass shooting last Saturday.

The “Brews for Q” fundraiser will pass on the day’s sales to charity campaigns set up after the attack that left five dead and more than a dozen injured at the popular LGBT+ nightclub.

A Facebook event for the fundraiser, put on by one of the local breweries, The Public House, describes how they are “joining many local establishments for #BrewsForQ this #SmallBusinessSaturday to raise money for the victims and their families”.

“From 12-5 pm on November 26, $1 from pints poured at both PH locations will be donated to a verified victim fund,” the event description adds.

The motive behind the Club Q attack that left five people dead and at least another 18 injured is still under investigation by authorities.

Anderson Lee Aldrich, 22, has been charged with five counts of first-degree murder and five counts of committing those crimes as part of a bias attack.

Prosecutor Michael Allen said that the suspect, who appeared in court on Wednesday via video with visible injuries to his face and neck, was “physically competent” to stand trial.

His next hearing is scheduled 6 December.

During the course of that interview with the San Diego-based news outlet, Mr Brink, 48, said that his ex-wife Laura Voepel called him in 2016 to say that their child, who was born Nicholas Brink, had changed their name and died by suicide.

He had continued to believe that his child was dead until six months ago, when he got a call out of the blue from Aldrich.

According to Mr Brink’s account, Aldrich was “pissed off” and wanted to “poke at the old man”.

He went on to say he taught his child how to fight at a young age and “praised him for violent behaviour”.

“I told him it works. It is instant and you’ll get immediate results,” Mr Brink told CBS8.

Who are the victims of the Club Q shooting?

Here’s what we know so far about the five people who were killed.

A former Army captain tackled a shooter who had opened fire on an LGBT+ nightclub in Colorado Springs and beat the suspect unconscious as a trans woman in heels stomped on him.

Richard Fierro, 45, said he was with family and friends at Club Q on Saturday night when the suspect burst in and began spraying the club with automatic gunfire.

Mr Fierro told the New York Times his military training kicked in and he ran towards the shooter, grabbed him from behind by his body armour and pulled him to the ground.

“I just knew I had to take him down,” Mr Fierro said.

A year and a half before he was arrested in the Colorado Springs gay nightclub shooting that left five people dead, Anderson Lee Aldrich allegedly threatened his mother with a homemade bomb, forcing neighbors in surrounding homes to evacuate while the bomb squad and crisis negotiators talked him into surrendering.

Yet despite that scare, there’s no record prosecutors ever moved forward with felony kidnapping and menacing charges against Aldrich, or that police or relatives tried to trigger Colorado’s “red flag” law that would have allowed authorities to seize the weapons and ammo the man’s mother says he had with him.

Gun control advocates say Aldrich’s June 2021 threat is a example of a red flag law ignored, with potentially deadly consequences. While it’s not clear the law could have prevented Saturday night’s attack — such gun seizures can be in effect for as little as 14 days and be extended by a judge in six-month increments — they say it could have at least slowed Aldrich and raised his profile with law enforcement.

Bernard Condon and Colleen Slevin have the story.

Records suggest suspect wanted to ‘go out in a blaze’

Anderson Lee Aldrich, the suspected shooter who killed five people in a Colorado Springs LGBT+ club over the weekend, previously told their family they wanted to be the “next mass killer”.

In June of 2021, Aldrich, who identifies as nonbinary, was arrested for threatening the grandmother, with whom they lived, with a homemade bomb, prompting a heavily armed police tactical team to respond and evacuate surrounding homes.

Eventually, crisis negotiators were able to bring Aldrich in, and they were booked into El Paso County Jail on two counts of felony menacing and three counts of first-degree kidnapping, according to the sheriff’s office.