Home » California sees increase in RSV, a respiratory illness that can be dangerous for babies

California sees increase in RSV, a respiratory illness that can be dangerous for babies 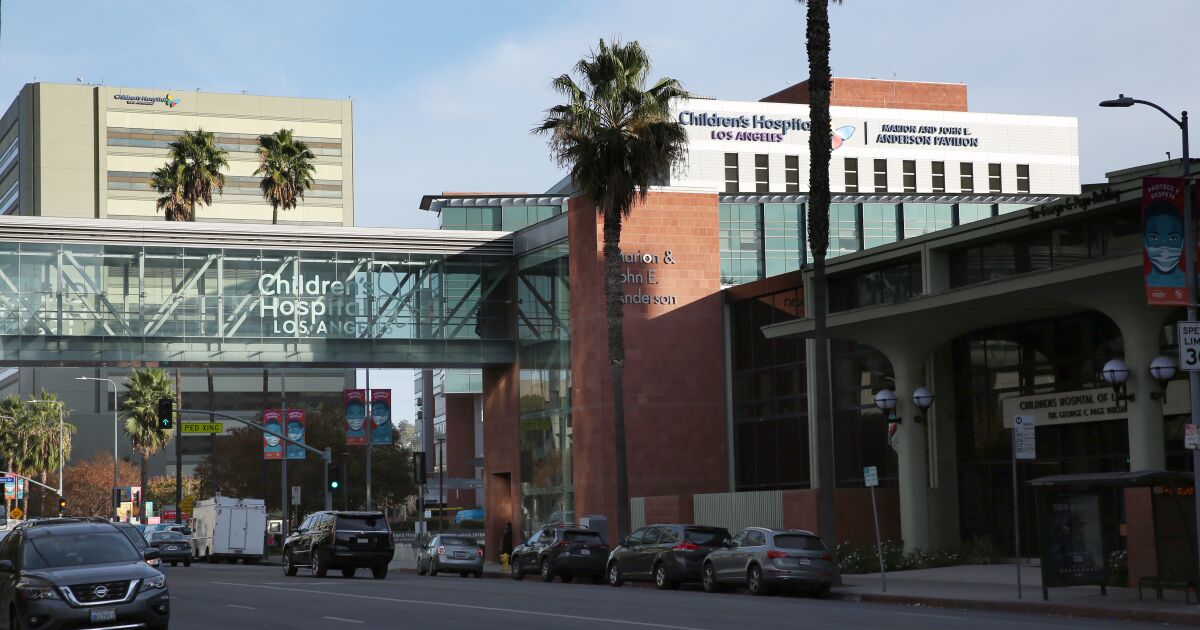 Some California children’s hospitals are straining under a surge of RSV, a respiratory illness that can cause babies to struggle to breathe.

At least three major children’s hospitals say they have experienced either a strain or a stretching of resources because of RSV. The illness normally peaks in winter, and doctors say it’s unusual for there to be such high levels in October.

The increase in RSV, which stands for respiratory syncytial (sin-SISH-uhl) virus, comes amid a rise in other respiratory illnesses in California, including the flu.

“This increase in RSV and other respiratory illnesses have stretched our capacity in the emergency department,” Dr. James Stein, chief medical officer of Children’s Hospital Los Angeles, said in a statement to The Times. The hospital has been trying to accept respiratory patients being transferred from other facilities but hasn’t always been able to because of capacity constraints in its emergency room, Stein said.

In the last week at Rady Children’s Hospital San Diego, nearly 200 children tested positive for RSV. That’s almost double what would be seen during a typical winter week.

“I think the hospital capacity is being strained,” said Dr. Alice Pong, a pediatric infectious disease physician at Rady. “We haven’t exceeded our capacity, but we are definitely very busy.”

The increase in cases caused by RSV and other viruses has led “to a real capacity issue for us,” said Dr. Christopher Vlasses, a pediatric hospitalist at UC San Francisco Benioff Children’s Hospital Oakland.

The hospital’s acute care unit, where respiratory patients are treated, “was filled to capacity essentially every day last week, with patients waiting in the emergency department for beds,” Vlasses said. Those being admitted are primarily babies.

In a bulletin Tuesday, Cedars-Sinai Medical Center in Los Angeles summarized the current situation: “An early surge in the virus is worrying pediatricians.”

“Healthcare experts are worried about the confluence of RSV, flu and COVID-19 as we move into the winter. The overlap of these three viruses, as well as others, is definitely a big concern for the next few months,” Dr. Priya Soni, a Cedars-Sinai pediatric infectious disease specialist, said in a statement.

Dr. Ira Wardono, a pediatric hospitalist at Providence Cedars-Sinai Tarzana Medical Center, added that “we are already seeing patients testing positive for more than one virus.”

“We are worried about patients clogging up the emergency department as well as inpatient beds,” Wardono said. “One thing parents can do is make sure their children get their flu shots and COVID-19 boosters where appropriate.”

RSV typically doesn’t get much attention, but this year it’s hitting many parts of the nation particularly hard, possibly because RSV transmission has been relatively dormant for the last two years, and there are many young children who have little immunity to the virus.

“In the last several years with COVID — as a very, very dominant presence — has basically pushed out all of the other viral activity, including flu and … RSV,” said Dr. Nancy Gin, regional medical director for quality for Kaiser Permanente in Southern California. “But this year, we’re seeing both the RSV presence and an increasing presence of flu. It is more active back East, which is common at this time of year, and it sweeps westward.”

Kaiser’s hospitals in Southern California “are running into occasional capacity issues for the pediatric patients,” Gin said. Usually at this time of the year there would be no such challenges, she added.

And in the Central Valley, Valley Children’s Hospital in Madera has been seeing “a large number of children coming into our emergency department for RSV and other respiratory issues,” even as coronavirus rates remain low and steady.

Meanwhile, UCLA Mattel Children’s Hospital in Westwood has not observed an uptick in RSV hospitalizations.

Dr. Anthony Fauci, President Biden’s chief medical advisor, said Saturday on ABC’s “Good Morning America” that “we’re seeing a surge” of RSV. Prior to the COVID pandemic, cases of RSV might’ve been spread out over time, but now “we’re seeing a concentration of them.”

“We’re seeing the rise of three respiratory viruses, all of them going up around the same time — that’s concerning,” said Dr. Ashish Jha, the White House’s COVID-19 response coordinator, referring to RSV, COVID-19 and the flu.

The good news, he added Tuesday, “is for two of the three, we have vaccines that are highly effective at preventing serious illness: COVID and flu.”

Getting youngsters those shots “takes two of the three issues off the table,” he said during a news briefing. “It also creates more capacity in the healthcare system and it just makes it better for everybody.”

With many people reverting to pre-pandemic behaviors, “we’re seeing a return to the normal viruses that circulate in the community,” Vlasses said, and there are “a lot of young children who are naive to the virus and don’t have immunity.”

Many children contract RSV and other viruses without experiencing severe illness and don’t require hospitalization, Vlasses said. Symptoms can include a runny nose, cough, fever or sore throat, all of which can be managed at home.

Jha estimated that about 90% of kids end up contracting RSV at least once by the time they’re 2 years old. But “because of the pandemic, some of the kind of standard patterns have been disrupted, so we’re seeing a lot of RSV at once.”

“For most kids, RSV is very, very mild. And my recommendation is, you know, pretty standard stuff, right? Avoid sick contacts. If your kid is sick, keep them at home to prevent spreading it to others,” he said. “Unlike COVID, which is purely airborne, with RSV, a lot of it is surface transmission, and therefore washing hands turns out to be actually quite a good thing.”

Those at higher risk include babies younger than 12 months — especially those under 6 months; premature infants; infants with underlying cardiac disease or chronic lung problems; and children with weakened immune systems. Older people also are at risk.

There have been no confirmed RSV-associated deaths in California this fall in children younger than 5, according to the state Department of Public Health.

RSV is highly transmissible. “Kids can get it from their parents, who might have just a mild cold. Older kids may not look that sick with it. But the little babies can get very sick with it, and certainly it can be spread in day care and schools,” Pong said.

Babies are particularly vulnerable because the virus attacks the very small airways that lead to their lungs, causing them to become inflamed. Substantial mucus production can block airways, and because babies’ “airways are much smaller, they have a lot more trouble handling all those secretions,” Pong said.

When those air passages get swollen, it’s very difficult for air to pass in and out of the lungs, and the baby can start wheezing, said Dr. Daisy Dodd, a pediatric infectious disease specialist for Kaiser in Orange County.

“Are they breathing faster? And are they using their muscles — their rib muscles, neck muscles or diaphragm muscles — to help them breathe? Can you see those muscles pulling in when they take a breath?” Schroeder said.

Another serious warning sign is being unable to feed well, resulting in diapers being less wet. When their noses are so congested, babies can’t feed and they get dehydrated, Schroeder said.

If a baby can’t eat or drink because of coughing, or has a difficult time catching their breath, “definitely, get in the car and come in right away,” Dodd said.

Babies at highest risk are those under 3 months of age, Vlasses said. They may need to be hospitalized so doctors can provide oxygen, manage their airways and give fluids intravenously.

Sometimes, babies will need intensive care if they go into respiratory distress.

In an advisory issued this month, the California Department of Public Health warned about the early increase in RSV, as have their counterparts in Los Angeles and Orange counties. Officials urged parents to keep sick kids out of child care, and discouraged healthcare, child care and nursing home employees from working while sick even if they’ve tested negative for the coronavirus because of the risk of spreading other viruses, such as RSV.

California officials said that for the week that ended Sept. 24, nearly 5% of respiratory illness specimens tested positive for RSV, a figure not usually that high until late November. “Hospitals have been reporting high numbers of respiratory illness in their emergency departments and clinics,” the Orange County Health Care Agency said in a statement.

Citing guidance from the American Academy of Pediatrics, state health officials suggested healthcare providers give high-risk infants and young children — such as those born prematurely or have heart or lung disease — the monoclonal antibody palivizumab. The injection is not used to treat RSV infection; rather, it is given to slow or stop the spread of RSV in their body should they become exposed to it.

Schroeder said RSV is not the only illness affecting California hospitals. “We’re really seeing all of the winter viruses, but several months early.” The last couple of weeks have been comparable to some hospitals’ busier winter weeks, he said.

To help children avoid risk of infection, Schroeder said parents should be “trying to do our best to not gather with families or other children who are actively sick.”

They also may want to keep older, sick children away from the baby, Dodd said.

Some families with newborns may even want to limit contacts with the baby during times of high viral transmission. Making sure visitors and family members wash their hands before interacting with the baby is also a good step, according to Dodd.

RSV can spread through the air and live on surfaces for a period of time, Vlasses said.

“I wouldn’t take my young infant — a newborn — out into a large crowd right now because there are lots of different viruses that they can get,” Pong said.

It is also important for people to get their flu shots and get boosted against COVID-19 to help protect babies too, health officials said.

“We don’t have a vaccine right now for RSV,” Vlasses said. “But we do have vaccines for other viruses that cause the same kind of disease that can be harmful to children. Vaccines are a really powerful thing that we can do as a community as we go into what I think is going to be a long year of respiratory illness.”

Read More: California sees increase in RSV, a respiratory illness that can be dangerous for babies

NBC Sports and Peacock combine to air live coverage of the 2022-23 Alpine skiing season, including races on the

Another year, another flood of noteworthy shows to try to sum up in one finite list.

Cyberpunk 2077 Is Getting a Game of the Year Edition – IGN