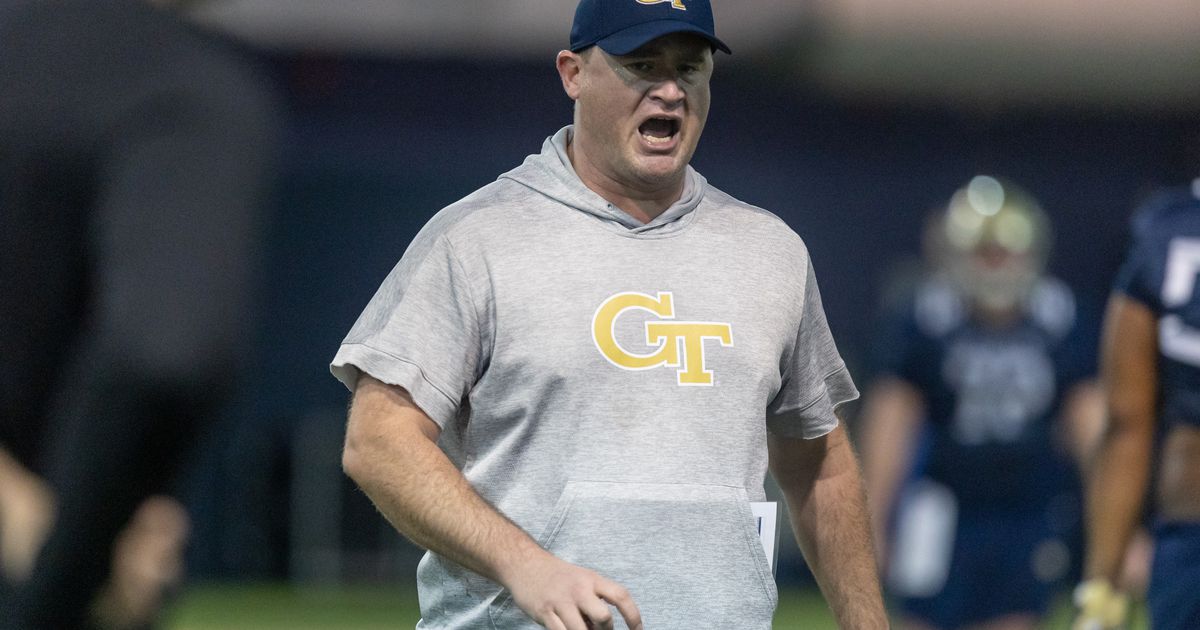 In statements, Cabrera expressed his gratitude to Collins for his hard work and commitment to his players.

“Unfortunately, the results of our football program have fallen short of what our loyal community, fans and athletes expect and deserve,” he said. “We are committed to rebuilding the program and a coaching change is a necessary first step in that process.”

He said Stansbury will always be respected and admired in the Tech community and that his dedication and love for Tech and its athletes are admirable.

“Unfortunately, the results of our football program have fallen short of what our loyal community, fans and athletes expect and deserve.”

“The challenges the athletic program has faced in recent years have grown to a point where we need to try a new approach, and that requires new leadership,” said Cabrera, who was not made available for an interview.

Frank Neville, Cabrera’s chief of staff and the senior vice president of strategic initiatives, has been named interim AD. Neville is Cabrera’s right-hand man and came with Cabrera from George Mason in 2019. The fact that Cabrera installed an interim from outside of the athletic department and not one of Stansbury’s subordinates may be an indicator that more changes could be coming.

Offensive line coach Brent Key, a Tech alumnus, has been tapped as the interim coach. Key, an All-ACC performer playing for coach George O’Leary 1997-2000, was one of Collins’ initial hires. The final eight games of the regular season, starting with the Yellow Jackets’ game Saturday at Pitt, could be an opportunity for Key to make a case for his earning the full-time position.

Athletic department staff were informed of Stansbury and Collins’ dismissals at a late-morning meeting Monday in the football team meeting room. Cabrera and Neville addressed the staff in the brief conference. Neville is not believed to be a candidate for the full-time job.

Of Tech’s 13 full-time head coaches, Collins has become the fifth to be fired and the second (following Bill Lewis in 1994) to lose his job before the end of the season.

In a text, a Tech staffer termed Monday a “surreal day, but we have to move forward. Our concern is, as it always should be, the amazing and resilient student-athletes.”

Another member of the staff: “Todd treated coaches, staff and student-athletes with respect, dignity and fairness. He led with integrity. He loves Georgia Tech and it showed.”

Of Tech’s nine full-time ADs, Stansbury becomes the first to be dismissed. It could be that none cherished the job more than Stansbury, a Tech grad (1984) and former football player. He was hired in 2016 from Oregon State and had aspired to sit in the same position performed with distinction by Homer Rice, the AD when Stansbury was in school and his eventual mentor.

“It’s like a member of the family, because I’ve always felt that way about our players, and he was one of our players,” Tech great Bill Curry said of Stansbury in an interview with the AJC. “I’m just sorry for all concerned.”

Parker Executive Search has been contracted to lead the search for a new AD and coach. Typically, the AD has to be in place for a coach to be hired – it would be unlikely for a coach to take the job without knowing who the AD would be – and time is critical. When Stansbury’s predecessor Mike Bobinski left Tech for Purdue in August 2016, Stansbury was hired six weeks later and didn’t take office until after late November.

Tech has an advantage to get its coaching search going in September, but that head start likely won’t be as useful without an AD running it.

Hired in December 2018, Collins aspired to lift the Yellow Jackets into the elite of college football.

His plan started with branding and culture, the first to attract recruits to Tech and the second to keep players from transferring. Marketing the team as energetic and positive and himself being active on social media, Collins made a splash with players and fans. When he landed four-star running back Jamious Griffin from Rome High in February 2019, it was seen as evidence for how he could win key recruits within the state of Georgia.

The 2020 class, his first full class, made a bigger splash, ranking 27th nationally (247Sports Composite). It was Tech’s highest ranking since its landmark 2007 class that included future NFL draft picks Derrick Morgan, Morgan Burnett and Jonathan Dwyer, which Collins had helped bring in as director of player personnel. The centerpiece was four-star running back Jahmyr Gibbs of Dalton High, one of four four-star signees. Collins often suggested that even higher-ranked classes were on the way, stoking the enthusiasm of the Tech fan base.

However, Tech had trouble competing from the first as its offense transitioned from the successful option scheme of former coach Paul Johnson. Perhaps in an effort to set expectations, Collins was not shy about selling the scope of the transformation as historic. But while the Tech offense had challenges, the defense did, too.

Tech was 3-9 in 2019 in Collins’ first season, with an early-season loss to The Citadel (and its option offense) the most troubling result. The pandemic created more problems in 2020, as recruiting and development were hampered. The Jackets finished the season 3-7, including a 73-7 home loss to then-No. 1 Clemson. It was Tech’s most decisive loss since 1894.

At the same time, the 2021 signing class, Tech’s efforts hampered by the pandemic and likely the Jackets’ unimpressive on-field performance, was ranked 47th. The 2022 class ranked 55th.

Collins set expectations higher ahead of the 2021 season, stamping it with the motto “WIN21.” Tech had the rising-star duo of Gibbs and quarterback Jeff Sims, key additions from the transfer portal and the feeling that after two years of taking their lumps, the Jackets were going to turn the corner.

The season started with a thud, a 22-21 home defeat to Northern Illinois, which had failed to win a game in 2020 (though the Huskies would go on to win the MAC title). The Jackets’ mistakes and questionable coaching decisions in that game set the stage for a season in which they would again finish with three wins. One of them was the highwater mark of his tenure, a 45-22 win over a ranked North Carolina team at Mercedes-Benz Stadium.

After the season, Collins fired offensive coordinator Dave Patenaude and two secondary coaches, and that was the start of a massive turnover. Most notably, All-American running back Gibbs left in the transfer portal, one of 13 players to leave following the end of the season. Four assistant coaches and general manager Patrick Suddes also left voluntarily for other jobs.

But the same issues that had plagued Tech in the first three seasons – mental errors and a shortage of discipline – were coupled with a lineup that was heavily dependent on inexperienced players. Fan sentiment strongly turned against Collins after the 42-0 home loss to Top 25 Ole Miss on Sept. 17, and Saturday’s loss to UCF appeared to push Collins over the brink.

The final ledger assigns Collins with four shutout losses, including Tech’s first at home since 1957. In his 38-game tenure, the Jackets lost six games by 40 points or more. The six before that had taken place over a period of 42 seasons.

In his term, just shy of six years, Stansbury oversaw a number of successes. Most notably, he led a $125 million capital campaign that was completed during the pandemic and still exceeded the target by $50 million. The centerpiece of the campaign, a $75 million renovation of the Edge Center, the department’s headquarters, is expected to break ground after the end of the football season.

Most of Tech’s nonrevenue teams, particularly volleyball, have become more competitive nationally and within the ACC. In the 2020-21 academic year, eight teams reached their sports’ NCAA tournaments, tying the school record set in the 2009-10 year. Last year, every women’s program – basketball, softball, swimming and diving, tennis, track and field and volleyball – all sent teams or individuals to NCAA postseason competition, a first for the school.

However, his tenure was not without its flaws. He was sued in December 2019 by Oregon State, his former employer, after not paying back all of the $2.1 million that he owed the school for breaking his contract with the school to take the job at Tech. The lawsuit was filed three months after Cabrera took office, not exactly starting off on the right foot.

Oregon State brought the suit despite the fact that Stansbury was given a $1.1 million loan by the institute that would be forgiven if he were to fulfill his five-year contract and also received a $900,000 salary that was $200,000 more than his predecessor (Bobinski) received.

After the lawsuit was filed, Stansbury was bailed out by another loan from the institute in January 2020, this time for $1.6 million, to cover the outstanding debt and he also took a cut in pay of almost $300,000 to $650,000. It was also to be forgiven if Stansbury were to stay through 2025. (By terms of the contract, the remainder of the loan is now forgiven because of the termination without cause.) But, perhaps just as notably, the contract had no length and entitled him to six months’ salary in case of termination. Receiving $325,000 for being fired would be cause for celebration in most circles, but for an athletic director at a power-conference school, it was an indication that he was walking on thinner ice with a president who had taken office months before the lawsuit.

Further, while partially outside of his control, the department’s revenues took a hit as ticket sales lagged due to the football team’s performance. The transition from Johnson to Collins was also costly, as was the impact of COVID-19. The department’s fund balance in June 2016, months before Stansbury took office, was $6.6 million. In June 2022, it was in a $12.1 million deficit.

While it fits into a larger cultural trend, the department also experienced significant turnover in recent years and has had difficulty filling open positions.

But from a political sense, none of those shortcomings compared to Stansbury’s backing Collins, whom he hired in December 2018 to succeed Johnson in a search he conducted by himself. He raised eyebrows with a seven-year contract and a $3 million starting salary, nearly the amount that the much more accomplished Johnson would have drawn in 2019.

Stansbury also gave Collins a larger salary pool for his assistant coaches and authorized the hire of more non-coaching staff.

But the results never showed on the field. Fatefully, he deemed Collins “my man” on Collins’ weekly radio show late in the 2021 season, days before Tech was throttled by eventual national champion Georgia before a sea of red-clad Bulldogs fans in Bobby Dodd Stadium. Stansbury’s loyalty to Collins rankled donors, as did his decision to not press Collins to change out defensive coordinator Andrew Thacker, whose unit had finished 117th in FBS in total defense. Even as the budget was tight, he authorized the hire of offensive coordinator Long at twice the salary ($800,000) of his predecessor, Patenaude (although it brought Tech in line with the salaries of other ACC coordinators, as Patenaude and Thacker were or are at or close to the bottom in the conference among coordinators in pay).

In doing so, he had linked his fate to Collins.

And when Collins failed to show the progress that Stansbury had set as a mandate – the 42-0 home loss to Top 25 Ole Miss was particularly costly – the writing was on the wall for both men.