A ‘silent-spreader’ STI which can cause infertility is feared to be evolving into a superbug.

Mycoplasma genitalium, also known as M. genitalium or M. gen, has become resistant to every antibiotic used to treat it so far.

The sexually transmitted infection was first discovered in London in the 1980s — but a test has only been available in the US since 2019. It means scientists are unsure exactly how widespread it is.

Some studies suggest just one in 100 adults in the US are positive for M. gen but experts estimate as many as a fifth will get it at some point in their life.

The bacterial infection has been linked to infertility, premature births and miscarriages, as well as cervical swelling and pelvic inflammatory disease.

There are increasing concerns it will become untreatable because the STI has developed resistance to the most popular antibiotic used to treat STIs, azithromycin, as well as quinolone, macrolide and doxycycline.

Alternatives are available but they cause severe side effects that mean they are not suitable for pregnant women. And there are signs it is already becoming tolerant to them, too.

There are also fears M. gen will become more common as STIs on the whole soar in the US. In 2021 there were a record 2.5million infections, up from 2.4million in 2020, itself an all-time high.

Superbugs are estimated to contribute to around 7million deaths per year, with some experts warning they should be taken as seriously as global warming. 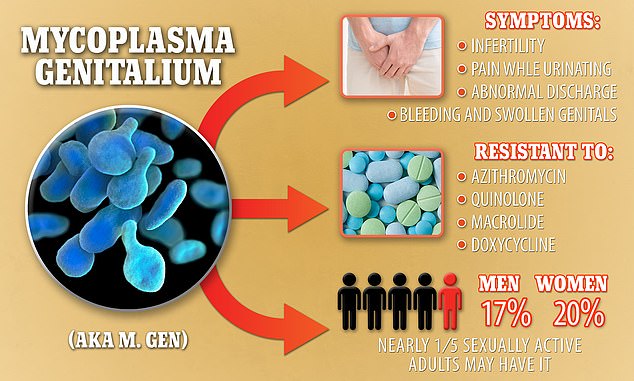 Mycoplasma genitalium, also known as M. genitalium or M. gen, causes serious symptoms including infertility, but is resistant to four different types of antibiotics. It is estimated that up to one in five sexually active US citizens could have it

It is a bacterial infection which infects the urinary and genital tracts of men and women.

First discovered in London in the 1980s, it is passed on through sexual contact.

Babies can also contract the infection from their mothers before they are born through the amniotic fluid.

It is more common in young people and also in people who have unprotected sex and who have multiple sexual partners (though this is true for all STIs).

The infection is similar to chlamydia, but is caused by a different bacterium.

Past M. gen. cases may have been mistaken for and treated as chlamydia, allowing it to gradual developing resistance to different antibiotics.

However, it is possible to have both infections.

Routine screening is not recommended by CDC.

Professor Paul Hunter, an expert in infection diseases at the University of East Anglia in England, told DailyMail.com M. gen has the ‘strongest evidence that it causes adverse health outcomes’ of any strain of genital mycoplasma.

The STI is also ‘difficult to diagnose’, meaning it spreads under the radar, he said.

‘Doing something about it is not easy as the infection is pretty common and most infections do not cause adverse health outcomes.’

M. gen can result in painful, bleeding and swollen genitals, and even infertility in women.

But many people will show no symptoms at all and can carry it for years without realizing.

The risk of early birth increased nearly twofold in women with M. gen, an analysis of 10 studies in 2021 found.

In men, M. gen can cause urethritis, swelling and irritation of the urethra, making it painful to pee, but more research is needed to establish the long-term effects of M. gen infection.

It can also cause abnormal discharge for both sexes.

Simon Clarke, associate professor in cellular microbiology at the University of Reading, told DailyMail.com it is ‘entirely feasible’ that M. gen becomes completely resistant to antibiotics.

However, he said multiple drug resistant strains are probably ‘some way off’.

He said the ‘silent spread’ is the problem, as people ‘don’t know to go and get tested and they spread it on to somebody else’.

Superbugs are estimated to kill 7million, either as co-infection or directly, every year. 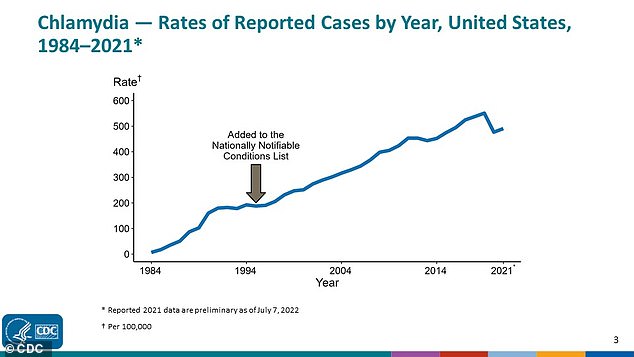 It comes amid soaring STI rates across the board. The rate of chlamydia, the most common STI in the US, has been climbing for over 30 years 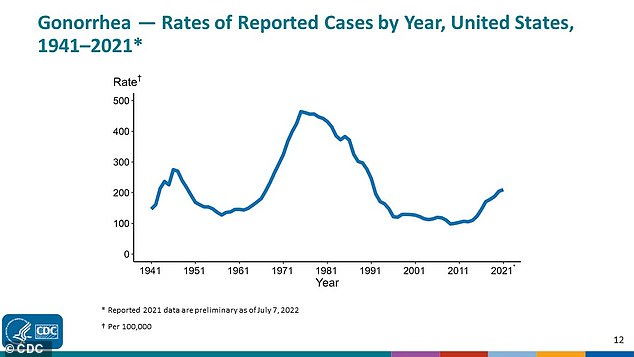 M. gen., chlamydia and gonorrhea can all be asymptomatic, meaning the STI silently spreads. Gonorrhea rates peaked in the 1970s but still remain high

What is antibiotic resistance?

Antibiotics have been doled out unnecessarily by doctors for decades, fueling once harmless bacteria to become superbugs.

The World Health Organization (WHO) has previously warned if nothing is done the world is heading for a ‘post-antibiotic’ era.

It claimed common infections, such as chlamydia, will become killers without immediate solutions to the growing crisis.

Bacteria can become drug resistant when people take incorrect doses of antibiotics or if they are given out unnecessarily.

Former UK chief medical officer Dame Sally Davies claimed in 2016 that the threat of antibiotic resistance is as severe as terrorism.

Figures estimate that superbugs will kill 10 million people each year by 2050, with patients succumbing to once harmless bugs.

Around 700,000 people already die yearly due to drug-resistant infections including tuberculosis (TB), HIV and malaria across the world.

Concerns have repeatedly been raised that medicine will be taken back to the ‘dark ages’ if antibiotics are rendered ineffective in the coming years.

In addition to existing drugs becoming less effective, there have only been one or two new antibiotics developed in the last 30 years.

In September 2017, the WHO warned antibiotics are ‘running out’ as a report found a ‘serious lack’ of new drugs in the development pipeline.

Without antibiotics, C-sections, cancer treatments and hip replacements will become incredibly ‘risky’, it was said at the time.

But a major study last year found they are the main underlying cause of 1.2million annual deaths globally.

This would make superbugs a bigger global killer than AIDS or malaria, which killed 860,000 and 640,000 that year, respectively. In comparison, Covid killed an estimated 3.5million people in 2021.

The Centers for Disease Control and Prevention (CDC) does not recommend routine screening for M. gen.

Because the test, known as the Aptima nucleic acid amplification test was only approved in 2019, it has not been rolled out widely and doctors do not need to report cases of the infection.

Patients will only be screened for M. gen after persistent symptoms and negative tests for other STIs.

This means there is no clear picture of how widespread M. gen is, or who it affects most.

But Lisa Manhart, a professor of epidemiology at the University of Washington School of Public Health, told NBC News that M. gen could be affecting as many as 20 per cent of sexually active women and 17 per cent of men between age 15 and 24.

By contrast, the most common STI in the US is chlamydia, with 5 per cent of sexually active women aged 14-24 infected with the STI.

If common antibiotics do not work, doctors can use moxifloxacin.

This does work but causes significant side effects, including nausea, diarrhoea, dizziness, and vomiting.

This means it is not a suitable treatment for everyone, particularly pregnant women.

And the more moxifloxacin is used to treat M. gen, the more likely it is to become resistant to that as well.

Aside from moxifloxacin, treatment options are limited.

The CDC currently recommends testing for antibiotic resistance prior to deciding which drugs to take, but these tests are not approved by the FDA.

Just a handful of specialized research centers can test whether the infection is resistant to an antibiotic.

Widely available versions of the test could take years, as could antibiotics that work.

Meanwhile, during the Centers for Disease Control and Prevention conference for prevention of sexually transmitted diseases on Monday, executive director of the National Coalition of STD Directors David Harvey said the rise in STIs was ‘out of control’.

Infection rates for STIs including gonorrhea and syphilis have been climbing for years, but last year syphilis cases reached their highest since 1948.

Read More: Scientists sound alarm over little-known STI in US resistant to EVERY antibiotic used