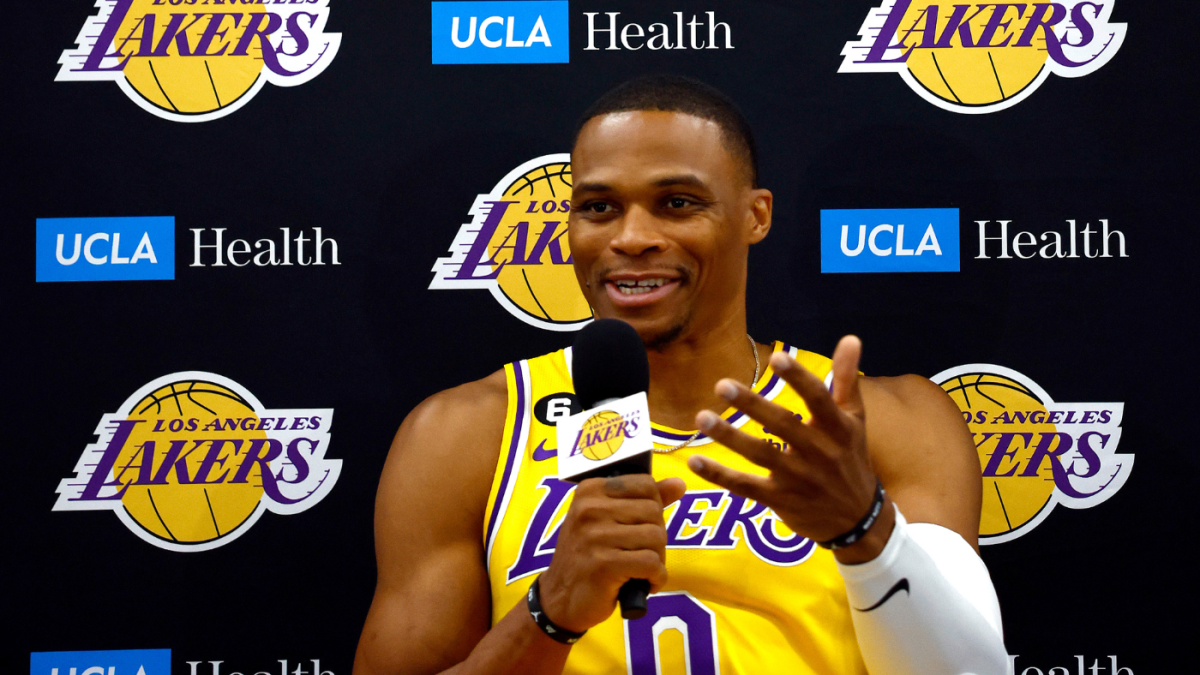 After a disappointing 2021-22 season that ended without even a trip to the play-in round, the Los Angeles Lakers were expected to make massive changes before the 2022-23 campaign rolled around. On some level, they did just that. Only five players returned from last year’s debacle, but with Russell Westbrook among them, the core problems of limited depth, defense and shooting that doomed the Lakers a season ago continue to plague the purple and gold. Expectations will therefore remain relatively low until the Lakers prove that they don’t need to make another move.

On Monday, all of the team’s key figures attempted to do just that. New head coach Darvin Ham, president of basketball operations Rob Pelinka and the entire roster (save Dennis Schroder, who is dealing with a visa issue) spoke on media day about the nightmare season they just endured, the one that’s still to come and everything in between. Here are the biggest takeaways from media day as the Lakers attempt to work their way back into the championship picture.

The biggest question of the offseason was originally when the Lakers would trade Westbrook. As the months passed, it shifted to why Westbrook hadn’t been traded. There were plenty of theories. Ham made it clear that he had a plan for Westbrook, so perhaps he wasn’t as bullish on sending him out as others. There are obvious financial motivations for keeping Westbrook. And of course, there’s the dreaded Lakers tax, a supposed premium teams charge the NBA‘s most prominent team in negotiations, especially when they’re desperate.

But Occam’s razor tells us that the simplest explanation is usually the correct one, and the simplest explanation here is that Westbrook is widely viewed as a negative asset and the Lakers do not want to give up assets just to remove him from the team. Getting anything of value back would mean giving up both of their available first-round picks. Pelinka made it clear that he is willing to give those picks up.

“One thing that needs to be made clear is, there was a lot of speculation, will the Lakers trade their picks? Will they not trade their picks? Let me be abundantly clear: we have one of the great players in LeBron James to ever play the game on our team. He committed to us with a long-term contract, a three-year contract. So of course, we will do everything we can, picks included, to make deals that give us a chance to help LeBron get to the end. He committed to our organization. That’s gotta be a bilateral commitment, and it’s there.”

Here’s where things get tricky: as this offseason proved, he’s not going to give up those picks just for the sake of doing so. As Pelinka pointed out, “you have one shot to make a trade with multiple picks, so if you make that trade, and I’m not talking about any particular player on our team, but if you make that trade, it has to be the right one. You have one shot to do it. So we’re being very thoughtful around the decisions on when and how to use draft capital in a way that will improve our roster.”

The implication is that the Lakers were not satisfied with the offers on the table. As far as the reporting tells us, the two primary deals discussed involved Myles Turner and Buddy Hield from Indiana or Bojan Bogdanovic and a selection of other role players from the Jazz. The Lakers may have traded Westbrook already if Kyrie Irving was truly on the table, but all signs suggest that he was not, and he is set to play out the final year of his contract in Brooklyn. If the Lakers are waiting for another player of Irving’s caliber to become available, well, they might never make a trade. Role player deals will be available all season. Eventually, the Lakers will have to decide how much of the season they’re willing to sacrifice waiting for the perfect trade.

Availability is the best ability

Over the last two seasons, LeBron James has played in only 101 games. Anthony Davis has played in even fewer, just 76. Whether Westbrook is around or not, the Lakers have no chance of contending without their two best players. Keeping them healthy is going to be a priority this season, and Ham promised to do his part. “I don’t need LeBron or AD playing playoff minutes in October, November or December,” the new coach said. Notably, Ham is coming from Milwaukee, whose head coach, Mike Budenholzer, is famously stingy with minutes for his stars. Giannis Antetokounmpo has never topped 33 minutes per game since Budenholzer took over as Milwaukee’s coach.

James has typically been against lowering his workload. “I think this whole narrative of ‘LeBron needs more rest’ or I should take more rest or I should take time here, it’s become a lot bigger than what it actually is,” James told reporters after a 2021 loss to Washington. “I’ve never talked about it, I don’t talk about it, I don’t believe in it. We all need more rest, s—. This is a fast turnaround from last season, and we all wish we could have more rest. But I’m here to work, I’m here to punch my clock in and be available to my teammates.”

But James sang a different tune on media day. James said that he is fully healthy after an injury-riddled season and said that he would “focus my game on being available.” What exactly that means remains to be seen, but on a team loaded with ball-handlers, the Lakers are likely hoping to limit his minutes as he approaches his 38th birthday.

Thanks for signing up!

Keep an eye on your inbox.

There was an error processing your subscription.

According to Anthony Davis, the Lakers had training camp shirts made with the word “chip” on them to represent the chip the team has on its shoulder going into the season. For the first time since Davis arrived in Los Angeles, the Lakers are underdogs. They aren’t a superteam or a defending champion. They’re just trying to prove they belong in the playoff picture. That has seemingly changed the entire culture of the team.

No player better embodies that culture than Patrick Beverley. When discussing what went wrong last season, Beverley, as an outsider, cited the “will factor” as something that worked against them. “Will they get back on defense? Are they willing to do the small things? I didn’t think so with the unit they had last season. That’s no discredit to anyone. But as a basketball player, I feel like I have top-10, top-11 mind when it comes to IQ in basketball, coming from a player like that, me, I didn’t know if they had the will factor. I didn’t know if they wanted to make the extra rotation. I didn’t know if they wanted to get on the floor, get dirty, scrape your knees getting a loose ball. I didn’t know that. As a leader, going to a team like that, if they didn’t do it, I’ll do it. Hopefully they’ll pick up from there.”

Beverley has a history of instilling such a culture on the teams that he plays for. He embodies the underdog spirit that the Lakers will now have to embrace. For now, he’s the guy who consistently does those things. If the Lakers are going to win anything this season, that will have to rub off on the rest of the team.

When Westbrook split with longtime agent Thad Foucher this offseason, Foucher’s statement indicated that Westbrook simply did not want to remain in Los Angeles. The feeling was, in all likelihood, mutual. But as Westbrook explained Monday, it ultimately doesn’t matter.

“Whether they want me here or not doesn’t really matter. My job is to be professional, show up to work like I’ve always done thus far, do my job the best way I know how to, and that’s it. We’ve all had jobs that sometimes people at our jobs don’t like us or don’t want us there, as you guys can probably attest to in any other job across the world. As a professional and as a working man I have to do my job and do it the best way I know how to be able to support and take of my family, and that’s what I’ll do.”

A ringing endorsement of his relationship with the Lakers, that was not. Pelinka went out of his way to praise Westbrook, but the fact remains that he is making $47 million this season on a roster devoid of tradable salary. If the Lakers are going to trade those two first-round picks, as Pelinka said they would for the right offer, Westbrook almost has to be in the deal.

Until then? His future is unclear. Ham refused to commit to a starting lineup, but he spoke positively about Westbrook’s attitude this offseason. “He’s been awesome,” Ham said. “Everything that I’ve asked of him he’s done. Everything has been about being selfless, being team-oriented, defense.” Of course, these were talking points repeated frequently before last season. Lakers fans can be forgiven for not believing it until they see it.