Home » Walking in the city: How fashion designer Rahul Mishra sees luxury in the beauty of nature,

Walking in the city: How fashion designer Rahul Mishra sees luxury in the beauty of nature,

Couturier Rahul Mishra likes long nature walks at Kalakhet in Uttarakhand, the leaf tendrils and wild flowers bobbing past his many mornings, brushing his imagination and finding their way into his lookbook. “Nothing can replace nature’s creativity,” he says, as he photographs each wayward flower for inspiration even at his studio in Noida. As he plans to set up a design laboratory in a large solarium in the hills, he explains his serendipitous moment. “This place is known as Kalakhet. To me, this sounds like a colloquial version of ‘kala kshetra’, a confluence of art.

This will not just be another design studio but a habitat of creativity. It will be an experiential residency drawing on the surrounding landscape and soundscape. Students can then filter them in their consciousness and express them in whichever way they want,” says Mishra, who believes design as a philosophy should flow into the smallest things in our life and not remain confined to the ramp. 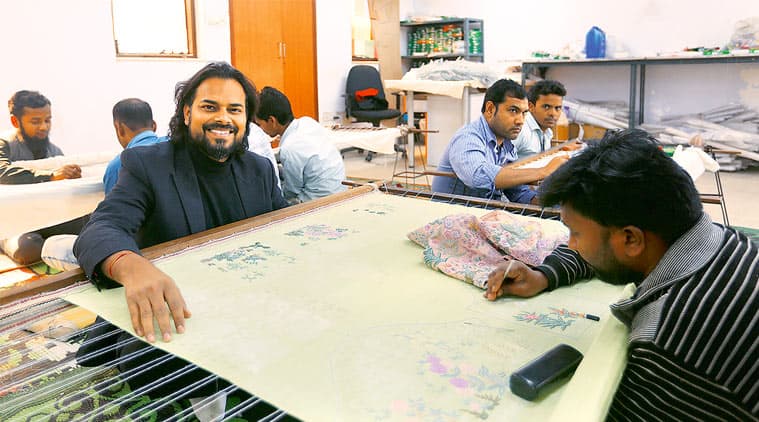 Rahul Mishra as his bustling Noida atelier, working with the karigars.(Photo: Gajendra Yadav)

At his studio, he has consciously developed a garden patch where he grows seasonal flowers. And at his workshop, his embroiderers are making thousands of floral appliques. One of them has used as many as 150 coloured resham threads on a 4×4-inch cloth to get the tonality and shades of each petal and each leaf vein right. Once the flower is embroidered, it is cut with a soldering tool and placed on the fabric that will be part of a bridal gown. This is just one flower. There will be more such overlaid on each other to create a 3D effect, a feature that defines all of Mishra’s couture collections, be it in Paris or Delhi.

“In my childhood, I would go through books of paintings and be fascinated by the works of Van Gogh, Monet and Dali. I learnt to draw and paint before I learnt alphabets and I simply follow Monet’s famous quote, ‘I want to paint the air around the scenery.’ Since I was good at physics, my father wanted me to go to IIT. So, I ran away from home and enrolled at the National Institute of Design (NID), Ahmedabad. He paid my fees reluctantly and for a long time, told everyone that I was a design engineer. But I was okay with that so long as I got to do my own thing,” says Mishra.

His collections have always drawn inspiration from the Himalayas. “I was obsessed with the thought of growing flowers and butterflies flitting in between them. That has seeped into my collections,” he tells us. Holding up a trail of a gown that he’s just finished, he explains how he’s translated the view from his favourite perch at Kalakhet where he often halts during his long walks. “My flowers are the same size as the real ones. And the snow peaks and the clouds floating above them have the same depth of perspective as I watched in the distance. The dress itself takes the shape of the flower. This is where my fantasy meets fashion, art blends with imagination and breaks boundaries.” It is this purity of connect that made Mishra’s “lotus pond” a much raved about topic at a couture show in Paris.

But the designer never dreams alone, he shares that with hundreds of craftspersons who are just as gifted and passionate. Rows and rows of them are immersed in their work, spread across low work tables, combining their traditional ari, challa, zardozi skills with French knots on a cape that’s to be shipped to Japan. He is the only designer who did not lay off his staff during the pandemic and, in fact, doubled his business. That’s because he future-proofed his business long ago. “We started reverse migration in 2014, which means we were moving our craftsmen and workers back to their villages and setting up mini-workshops at their homes. We would tele-conference and have WhatsApp chats on everything from design consultations, ideation, mock-ups to even logistics of moving goods,” he says.

That idea, too, came on a walk, the one he took with his now wingman Afzalbhai Zariwala to his Dharavi tenement. “Most craftsmen are migrants and work in these quarters with a wooden khat in the same room. Afzalbhai had lived in Mumbai for 20 years alone. He sent back 90 per cent of his earnings back to his village, where his family lived. Both he and his mates would sleep on the factory floor and eat vada pav to save on rent. I saw how they sacrificed their entire working life to earn a living that they could not enjoy in their lifetime. The biggest empowerment is also when you enjoy the fruits of your labour. Afzal’s house in the village is beautiful and spread out. It’s been his family home for generations, so he doesn’t have to bother about rent. Yet without opportunity, he had to head to Mumbai for his livelihood and live like a nobody. We wondered what if we got a little workshop or unit space there? He got his house painted, cleaned it up, refurbished his big kitchen so that he could feed some of the unit hands whom he had hired to assist him. The result: they had their family around them, could eat home-cooked food every day and without the burden of extra costs, could focus on their craft that much more. In a village, they use bicycles, so there are no travelling costs. In Dharavi, they had to walk one km to relieve themselves, cook their own food and waste a lot of time. Also, when the pandemic happened, it affected the bigger cities more than the smaller centres, so their work never got affected. Embroiderers like Hukum Lal could buy a laptop and we have daily meetings on designs and motifs,” says Mishra.

Thanks to this experiment of allowing his team to work from their native places, people like Afzalbhai developed a sense of self-entrepreneurship and creativity. “This is how I realised that home-cooked food, living with parents and family is not just about empowerment, it is the only luxury. And they became the voice of my fashion,” says Mishra proudly, as he tries to relocate as many of his workers as possible to their homes and visit his design laboratory before a big collection is about to be launched. “Happier people have meant there’s a whole new democracy of ideas,” says Mishra.

As we walk past Noor, who has been with Mishra ever since he began his embroidery unity, we find him shading a flower with resham threads to give it a 3D effect. He thinks of the flowers he’s grown up with back in his hometown of Samastipur as he recreates each stamen and filament. He now has his own unit at Samastipur, where the nimble-fingered Shifa and Hunar are busy putting together a lehenga, following the sample he’s sent to them. “My lehengas are made in the villages,” says Misra with pride. No wonder he called his last couture collection “The Tree of Life.”


Read More: Walking in the city: How fashion designer Rahul Mishra sees luxury in the beauty of nature,