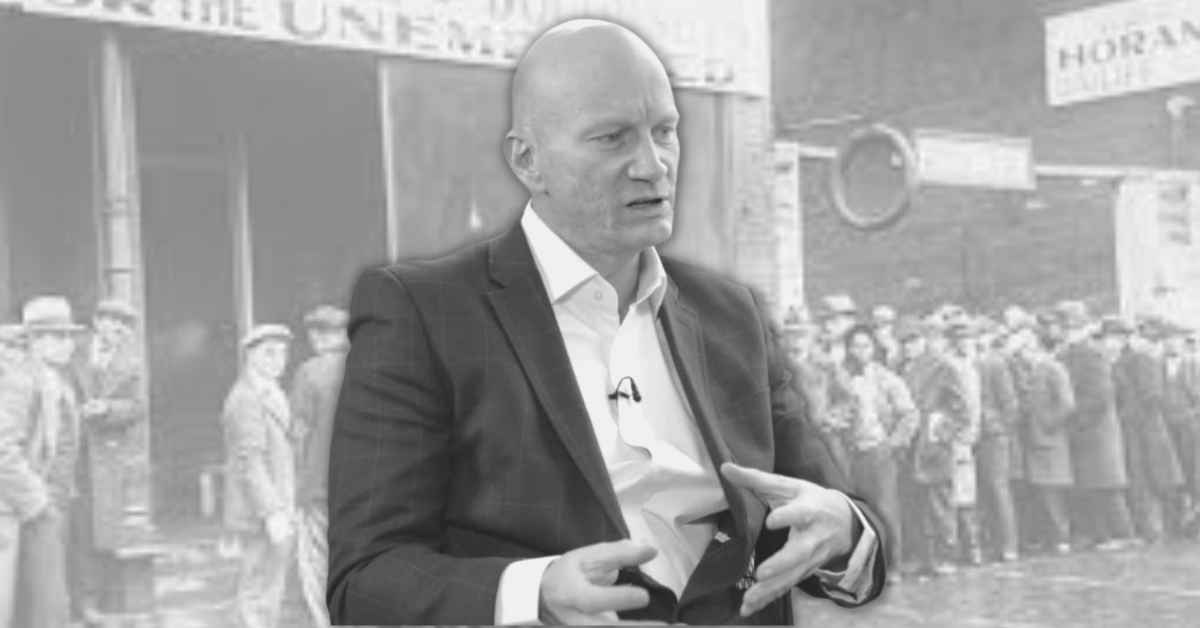 Life as we know it is about to change dramatically as the world is plunged into a “far-reaching economic depression”.

That’s the view of veteran analyst Francis Hunt, who believes central bank overreach and global debt will create an environment the world has never seen before.

“Unlike the Great Depression of the 1930s, this (will be) a full-scale globalised depression,” Hunt told Asia Markets.

“It’s a pretty dystopian message .. (but) we’re seeing it across all charts.

It’s a crisis Hunt says has been building “like a slow-motion car crash” through decades of ever-increasing money issuance.

When could an economic depression begin?

Whilst many finance experts and strategists believe a depression is unlikely any time soon, Hunt is of a very different opinion.

The experienced trader, who’s been cited by Bloomberg and previously made accurate predictions around currencies and the price of oil, expects signs of a depression to emerge early next year.

“All the media will be talking about it and then it’ll be, wow, what do we do?” Hunt said.

“I think 2023 and the following year will be tainted by this event. It’s kind of a GFC (Global Financial Crisis), only in my opinion, larger.”

Hunt says it will begin with empty stores, then huge numbers of people will no longer be working and interest rates will spike.

He believes there will be chaos, confusion, social unrest, and perhaps in some countries – Marshall Law.

The death of the middle-class?

Hunt predicts most people currently on salaries will be without money, unless they’re CEOs or at board level.

“You’ll have accountants, doctors and nurses who can’t afford to eat.

“And when your supply chain breaks down and you don’t have food in the stores, people loot and steal from each other.

“The poverty effect could be huge. Any form of leverage could have a real inverse wealth effect for the everyday man.

“We could see the death of the middle classes. That’s quite a hectic message, (but) it’s exactly what I think.

“I’m not spinning you a yarn. I mean, I feel this is a high-probability event.”

Who will be hit first?

Hunt says the first signs of major trouble are already emerging in Asia, where currencies are weakening almost across the board.

“Asia is the ‘sweet spot’ for currency collapse and the need for response,” he said.

“The Asian FX currencies are going to get properly slammed against the dollar.

“That’s what the charts are showing us (and it) could involve something geopolitical, such as an escalation in tensions between China and Taiwan.“

According to Hunt, the fallout is likely to be devastating for people who have large amounts of debt.

And we know that China, for example, has huge numbers of citizens with large mortgages, including many who are paying back loans for apartments that are yet to be built.

“They’ve outdone (the west) on leverage and purchasing,” he said.

“There’s a whole bunch of people that have actually stopped paying mortgages because builders haven’t even started building their units”.

Hunt believes the outcome will be worse than the Asian Financial Crisis of 1997, which sparked fears of a worldwide economic meltdown.

“I lived that and remembered that quite well. This is going to be that, times two,” he said.

“This process has already started. We continue to get positive endorsement for our views.

“This is an impoverishment moment for the middle classes of the globe, but particularly the far east.”

The Asian currency charts are indeed showing weakness against the US dollar and Hunt believes the situation will continue to spiral, causing the following consequences:

Hunt says another significant event will be the nationalization of Chinese real estate giant Evergrande, which has been the brink of collapse for many months as it struggles to pay back a mountain of debt.

Energy crisis to cause ‘winter of discontent’

Already Germany is experiencing a spiralling energy crisis as a result of the Ukraine and Russia conflict and Hunt believes the problems will spread to other parts of the northern hemisphere.

He believes rapidly increasing energy costs will lead to “grannies freezing in their flats” in the United Kingdom as the new Liz Truss government tries to artificially bring those prices down.

“We think the northern hemisphere, particularly northern Europe, is going to have a bitter season,” he said.

“We’ll need to go back and ask ourselves – what are our physical needs?”

Those needs, he says, are the basics – like energy, shelter, water and food.

“Farming has almost been almost demonetized compared to being an investment banker, to such an extreme that we just think of them as dirty people who rummage around in the dirt,” he said.

“Now, boy, are they going to come back into fashion.

“So the winners are going to be the farmers – people who are direct providers of food – and energy providers.”

Hunt strongly believes a global depression would cause a major ‘reset’ of the financial system, which would change the way we transact forever.

He says while investment banks and corporate finance may continue to exist, traditional bank branches will be a thing of the past.

“The kind of thing that you do with a savings account and a cheque book – you’re going to be transitioning,” he said.

“This is actually a destruction event of the traditional finance system.”

In its place, Hunt says, will be a system centred around central bank digital currencies.

“This is a surveillance finance era. Central Bank digital tokens as a currency … will be a powerful force for (governments),” he said.

“They’ll have all your data centrally. They will have centralized mega-data and they can stop you from making certain purchases.

“Money has always been a point of control. You’re going to have a system where they can control, curtail.

“And if they decided there’s too much inflation, they could just hand a 20 per cent hair cut across everybody’s wallets. Guess what – you’ll spend less.”

Hunt believes China may already be planning a digital currency pegged to gold, and has concerns about where the technology could be headed.

He believes the people of the world will blindly agree to the new system, because they will fell like they have no other choice.

“When you impoverish someone and put them in stress, they’ll sign anything,” he said.

“They’ve got a deal they need to ram down your throat, so they need you poor, hungry and in despair, begging for somebody to do something.

“We’re talking about a resetting of the clock. That’s why they’ve called it a reset.”

Hunt, who has previously been bullish on certain cryptocurrencies, believes there are some dark days ahead for Bitcoin and other digital assets.

“Crypto is liquidity like shares. They get sold by people who absolutely need money at all cost,” he said.

“Crypto (is heading) down – horrendously down. It’s going to be a bloodbath.”

Hunt says he has short positions on Cardano (ADA) and IOTA, and believes Bitcoin will plummet below US$10,000 for the first time since 2020.

He believes a depression will contribute to this, along with an expected crackdown on Bitcoin and its (alleged) impact on climate.

“Proof of work as a concept, is not accepted and sustainable. So they’re going to want everyone to go proof of stake,” he said.

“Ethereum now has a better chance of surviving, in my opinion, than Bitcoin.”

How Francis Hunt will trade the ‘depression’

Hunt says if his predictions of a depression eventuate, his primary goal will be to survive.

“If you survive the attack you’re automatically going to be pretty well off,” he said.

To do this, he says he will ensure he has minimal debt, exposure to physical gold and silver, and a high level of self-reliance when it comes to food, water, energy and shelter.

“It pays to be in an affluent area where people have decent plot sizes,” he said.

“It’s a major opportunity for real leaders to stand up.

“The grass always grows greener after the fire.”

This article reflects the personal views of Francis Hunt and is offered as information only. To read more from Hunt, you can visit his website or YouTube channel.

Asia Markets offers a unique perspective on economic developments in Asia and around the world. You can subscribe FREE here.