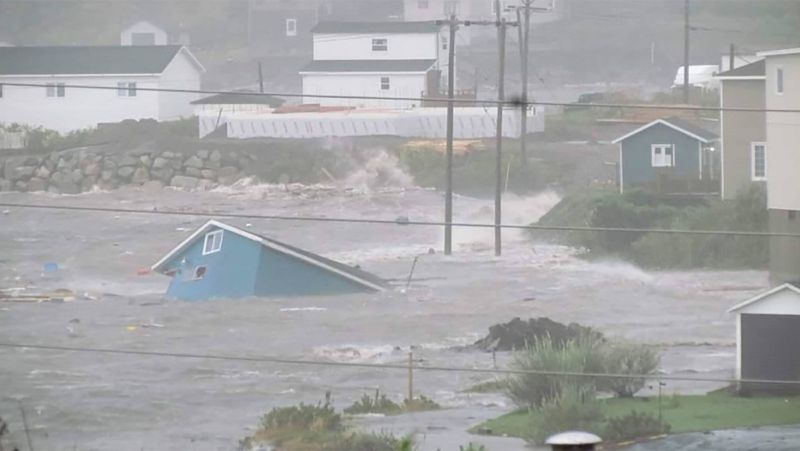 The storm named Fiona slammed into Canada’s eastern seaboard with hurricane-force winds and torrential rainfall Saturday, pulling buildings into the ocean, collapsing homes, toppling trees and knocking out power for hundreds of thousands of people.

Fiona first wreaked havoc in the Caribbean as a hurricane before moving up the Atlantic and making landfall again as a post-tropical cyclone. The storm ripped a path of destruction in Nova Scotia, New Brunswick, Prince Edward Island and Newfoundland before weakening and moving out to sea Sunday.

Now, officials are beginning to account for the damage brought forth to the region.

Nova Scotia, where Fiona first made landfall during the early morning hours Saturday, was hit hard by the storm. Powerful winds toppled trees and power lines, washed out roads, littered neighborhoods with debris, and in many cases, snapped whole power poles in half, officials said.

“Getting roads cleared, giving space to the crews to do what needs to be done, that’s the most important thing right now,” Houston said. “It will take time.”

One person in Newfoundland reportedly died in the storm. Houston said there haven’t been too many reports of serious injuries, though about 200 people are currently displaced from their homes.

“The damage is significant, but right now that the priority right now is getting power back to people, getting people to a safe shelter, getting, you know, some return to normal,” he said. “That will take time when we come out of this.”

A home fights against high winds caused by Fiona in Port aux Basques, Newfoundland and Labrador, on Saturday, September 24. The home has since been lost at sea.

Waves pound the shores of Eastern Passage, Nova Scotia, as Fiona made landfall on Saturday.

A man clears limbs and debris from his street in Halifax on Saturday.

Residents stand in floodwaters following the passing of Fiona on Saturday in Shediac, New Brunswick.

Workers lift a downed wire to allow machinery to access fallen trees in Halifax on Saturday.

A sailboat lies washed up on shore Saturday in Shearwater, Nova Scotia.

Georgina Scott surveys the damage on her street in Halifax on Saturday.

Restaurant tables are turned upside down in Halifax ahead of Fiona on Friday, September 23.

Francis Bruhm places sandbags around the doors of the Nova Scotia Power building in Halifax on Friday.

A pedestrian shields themselves with an umbrella while walking along the Halifax waterfront on Friday.

Canadian Prime Minister Justin Trudeau said Saturday that the government approved Nova Scotia’s request for federal assistance and that Canadian Armed Forces will be deployed to help out in the region. The Prime Minister said residents lived through a “terrifying” 12 hours Saturday.

“People have seen their homes washed away, seen the winds rip schools’ roofs off,” Trudeau said. “And as Canadians, as we always do in times of difficulty, we will be there for each other.”

In Prince Edward Island’s Charlottetown, police shared images of downed power lines over buildings, fallen trees blocking roadways and piercing through structures. The region’s utility, Maritime Electric, said it was concerned about people out walking and driving on streets where there is widespread damage from downed power lines and possible live wires.

Several provinces were impacted by the heavy winds and rain, but none more than Nova Scotia. As of Monday morning, more than 284,400 customers were still without power across Nova Scotia, Prince Edward Island and New Brunswick – including more than 190,400 in Nova Scotia, according to Poweroutage.com.

Poor weather conditions have hampered power restoration efforts, Nova Scotia Power President and CEO Peter Gregg said Saturday. More than 900 power technicians were on their way to the area, but some customers may experience power outages for several days, he said.

“The magnitude of this storm has been breathtaking,” Savage later said at a Saturday news conference. “It turned out to be everything predicted.”

Osborne Head in Nova Scotia received 192 mm (7.55 inches) of rain and Crowe Brook in New Brunswick got 107 mm (4.2 inches), among other heavy rainfall amounts across the provinces.

In Newfoundland, video showed buildings floating in water and submerged cars under heavy rains. A woman was rescued from the water after her house collapsed, according to the Royal Canadian Mounted Police. She was taken to a hospital; the extent of her injuries wasn’t immediately known, police said.

Port aux Basques, a town at the southwest tip of Newfoundland, was also one of the worst-hit areas, Trudeau said Saturday.

“We’re seeing devastating images coming out of Port aux Basques,” he said. “Obviously as we see the images of houses falling into the sea, of waves destroying property and buildings, our first thought needs to be for people.”

The Royal Canadian Mounted Police on Sunday recovered the body of a 73-year-old woman who had been washed out to sea the day before in Port aux Basques.

“The woman was last seen inside the residence just moments before a wave struck the home, tearing away a portion of the basement,” police in a press release.

This is the first death attributed to Fiona in Canada. The storm claimed at least six other lives along its path – one in Guadeloupe, three in Puerto Rico and two in the Dominican Republic.

Port aux Basques is now under a boil water order, and power was still out for many residents. Concrete barriers were also set up around areas that were rendered “danger zones” by the storm, the mayor said.

The Port aux Basques tide gauge recorded a maximum total water level of 2.73 meters (8.96 feet) – topping its previous record of 2.71 (8.89 feet) meters set in 2017, according to the Canadian Hurricane Centre.