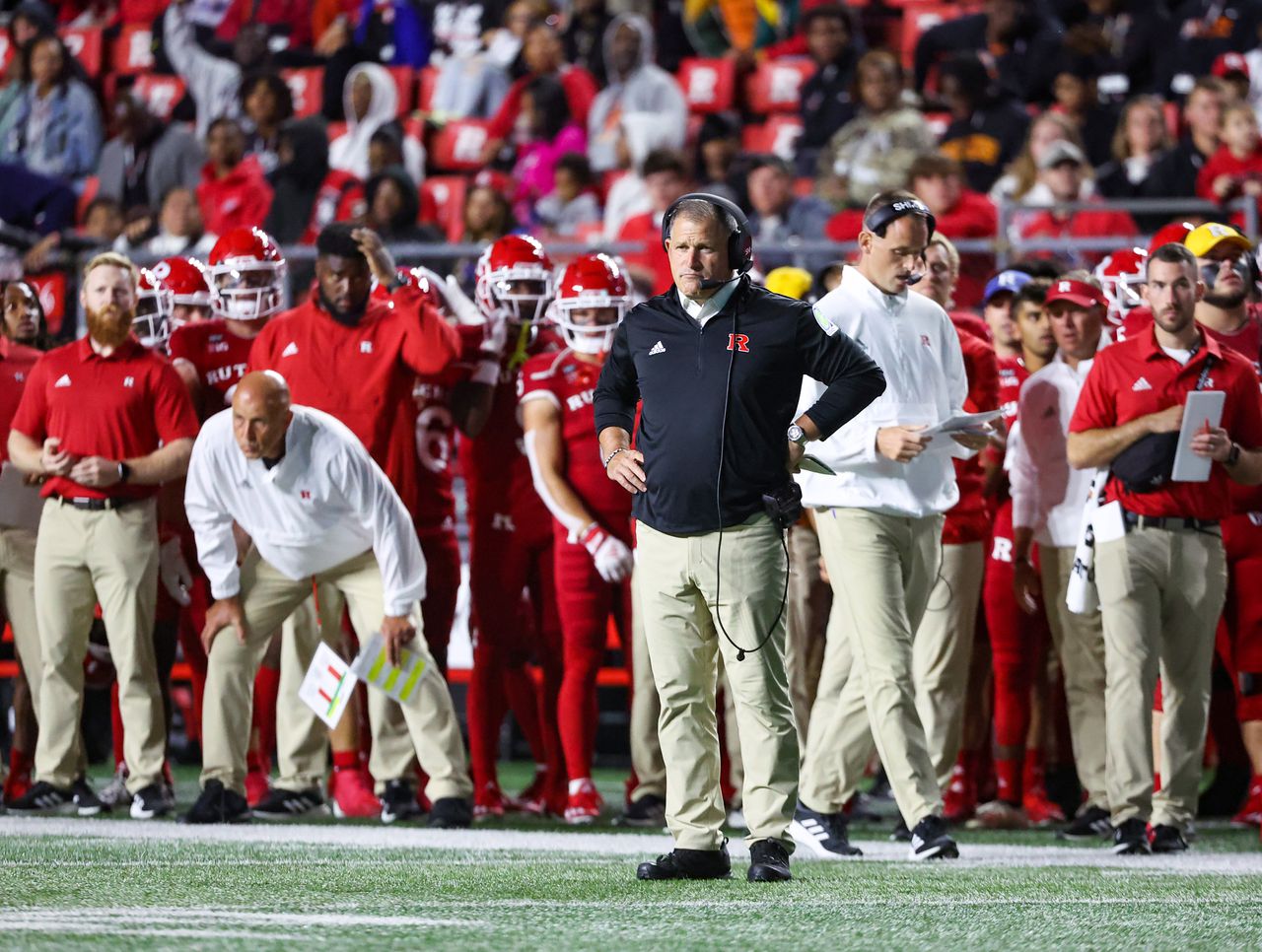 For Rutgers fans, the Big Ten opener against Iowa was a good test about your level of optimism. You could have summed up this loss, quite accurately, by pointing out that the Scarlet Knights would have had a chance to win if they didn’t score 14 points for the Hawkeyes.

Or, if you are so inclined, you can focus on, you know, the whole scoring-14-points-for-the-Hawkeyes thing.

This one isn’t all that complicated, folks. Rutgers is not a program that can make any mistakes against a solid Big Ten program like Iowa and expect to win the game. Two mistakes that end up in their own end zone? Just forget about it.

This was a major missed opportunity for the Scarlet Knights. The night started with an announced crowd of 53,117, with most of the fans in their seats when FS1 turned on its cameras to a national audience. It ended with a predictably empty stadium and a few hardy Iowa fans — is there any other kind? — chanting “Let’s go Hawks!” as the away team celebrated another ugly win.

Rutgers still can’t get out of its own way offensively. Fans might pin that on Sean Gleeson, the offensive coordinator turned message board pinata, but execution was the bigger problem in this game. Rutgers is 8-0 since 2020 when it doesn’t make a turnover, which is likely the reason head coach Greg Schiano has taken such a conservative approach in victories against Boston College and Temple.

But with a chance to go 4-0 against a much better opponent, playing it close to the vest wasn’t going to work. Rutgers was ahead 3-0 when Evan Simon’s pass was intercepted by Iowa linebacker Cooper DeJean and returned 44 yards for a touchdown. Then, in the second quarter, Iowa safety Kaevon Merriweather returned a Joshua Youngblood fumble for a TD and a 14-3 lead.

That was all Iowa needed. The result for Rutgers was a Big Ten record 20th straight home loss in conference play, and for this season, it casts doubt on how this team will compete as the Big Ten meat grinder begins. It certainly won’t beat anyone if it keeps scoring against itself.

Here are five observations from Rutgers-Iowa:

The numbers were pretty good. Evan Simon completed 28 of 49 passes for a career-high 300 yards, and one week after the Scarlet Knights had just 59 passing yards in a 16-14 win over Temple, that is a certainly a big improvement.

But the numbers, mostly amassed late in the game against Iowa second teamers, don’t tell the story. Simon, the only scholarship quarterback available for this game, threw two killer interceptions — including one that was returned for a touchdown — and misfired on several throws early in the game that might have changed the outcome.

Schiano won’t given an injury timetable for any of his players. The eye test, however, on injured quarterbacks Noah Vedral and Gavin Wimsatt during warmups indicates that both will be back sooner than later. Perhaps even next week at Ohio State. They need both back, ASAP.

The Twitter account @CFBFilmRoom had a fascinating stat this week. Rutgers, under first year defensive coordinator Joe Harasymiak, was leading the Big Ten in blitz rate against FBS opponents — and it wasn’t particularly close. Rutgers blitzed on 41.8 percent of its plays, according to the site, well ahead of Purdue at 34.9 percent.

The aggressiveness certainly worked against Iowa in the second quarter. The Hawkeyes were running the ball effectively when, somewhat inexplicably, they called a pass. Before quarterback Spencer Petras could throw, Rutgers defensive back Christian Izien brought him down for a drive-killing eight-yard sack on a well-timed blitz.

The D attacked when Iowa ran the ball, too. Wesley Bailey, a sophomore defensive lineman, knifed through the Iowa line on first-down run to tackle Gavin Williams for a six-yard loss. The defense wasn’t perfect, but it held its own on a night when the Rutgers offense kept scoring points for the opposition.

Rutgers was down 24-3, a deficit the Scarlet Knights weren’t going to overcome in a month, much less in a quarter. Still, as he has done since returning to Piscataway, Schiano set the tone by refusing to accept an outcome that seemed certain. Remember the crazy lateral play in a 2020 loss against Indiana? This was like that, only less dramatic.

He kept his offense on the field three times in Iowa territory in the second half on fourth down. The first two plays, the Scarlet Knights moved the chains — including a nice 10-yard pass from Simon to receiver Shameen Jones. That was the key moment in an 82-yard drive that ended, predictably, on a fourth-down play that did not go their way.

This time, on fourth and four from the Iowa 7, the Hawkeyes sent pressure at Simon, and the quarterback fired a pass into the end zone that wasn’t near anyone in red. Iowa took over on downs. On the next drive, however, Rutgers finally broke through and scored a touchdown.

It is rare, if not close to unprecedented, to have a college football game get national attention exclusively for the quality of its punters. Adam Korsak vs. Tory Taylor was the main billing for Rutgers vs. Iowa, and somehow, it managed to live up to the hype.

For Rutgers, Korsak was brilliant as usual. He pinned Iowa inside the 20 twice in the first half, including one that was downed at the six. Had Rutgers not handed Iowa 14 points on turnovers, Korsak would have been a major reason for the Scarlet Knights keeping this one close.

For Iowa, though, Taylor was just as good. He pinned Rutgers at the 4 and the 7, and somehow avoided disaster when Rutgers cornerback Max Melton came through untouched and deflected a first-quarter punt. Taylor looked for the ball behind him, but it rolled to the Rutgers 37.

So who won the punting war? Call it a draw.

5. A FERRIS WHEEL, A HUGE RECRUITING DAY AND A NICE TRIBUTE

Here are a few other thoughts about the Rutgers-Iowa scene, the Big Ten and more:

a. A Ferris Wheel! If the Boardwalk has a log flume at the next home game, I’m hopping onto airbnb and booking a place for next summer.

b. Schiano stepped off the bus for the Scarlet Walk and immediately hugged Abram Wright, a three-star linebacker recruit from Florida. This was a huge recruiting weekend for Rutgers — and not just for the football team. Eleven different teams took advantage of the night game to schedule official visits.

c. Rutgers held a moment of silence for Xavier McClain, a Linden High sophomore who died from head trauma sustained in a game on Sept. 9, and Ali Muhammad, a Rahway High player who died in his sleep the day before. It was a classy gesture that shows the connection between New Jersey’s top college program and the high school level.

d. Travel enough around the Big Ten, and you’ll find that most of the conference schools have a big presence in the closest major airport — be it a store, or a display, or something. That’s why Rutgers put a giant Scarlet R in Newark Airport last week.

e. The good-news-bad-news score of the week for the Scarlet Knights? Minnesota pouring it on against Michigan State in an easy 34-7 victory. The Oct. 29 trip to Minneapolis looks like it’ll be a tall task with the Gophers in position to win the Big Ten West, but the trip two weeks later to East Lansing slides onto the “winnable games” list for the Scarlet Knights.

f. The atmosphere at kickoff was great, with a packed student section and new-look light show greeting the primetime TV audience. It’s a shame, though, that Rutgers didn’t give that crowd a reason to stay into the second half. Rutgers cut the lead to 24-10 in the fourth quarter. Would the crowd have mattered at that point? Probably not, but it was long gone.

g. In the press box this week: Giants general manager Joe Schoen and director of player personnel Tim McDonnell. Something tells me they jotted the name Cooper DeJean into their notebook after watching the Iowa linebacker’s off-the-charts interception return for a touchdown in the first quarter.

i. The Rutgers offense isn’t good enough to survive many missed opportunities. Three drops in the first two drives — including two by the usually sure-handed Langan — were killer.

j. If Aaron Judge doesn’t hit his 61st home run soon, can Rutgers offer him some playing time as a tight end?

The search for Luther Wright, once N.J.’s greatest hoops talent

Thank you for relying on us to provide the journalism you can trust. Please consider supporting us with a subscription.

Steve Politi may be reached at spoliti@njadvancemedia.com.