Home » Getting high in the Appalachian Mountains

Getting high in the Appalachian Mountains

Six thousand feet up in the North Carolina back country, our trail towards the top of Mount Mitchell has shrunk to just a cleared path between the roots. A red-spotted purple butterfly lands on my shirt, mistaking me, perhaps, for one of the laurel trees closing in on us. As the way grows steeper, a rope appears out of the foliage to steady us as we find our footings in the craggy earth. Then, just as we start to break a sweat, it evens out and the forest parts to reveal a stone viewpoint and a mountain range that seems to stretch on for ever.

Mount Mitchell, in North Carolina’s wild west, is as high as you can get east of the Mississippi River. A favourite of outdoorsy types in the region, it keeps a fairly low profile internationally — probably because it is only half the height of the average Rocky Mountain. But for fair-weather hikers like me and my husband, it presents a leisurely, and far less crowded, alternative.

We have come to preview the Appalachian High Route, the new trail connecting the tallest peaks in the Appalachians — and there are dozens, from the Blue Ridge Mountains to the Great Smokies. Hardcore hikers may soon be clambering to outpace one another around the entire 350-mile route. But until that happens you can spend a week daytripping between its greatest hits and retreating to old-timey village inns by night — and have it practically to yourself. Our guide up Mount Mitchell is Jake Blood, a retired military veteran and experienced climber. As co-founder of the North Carolina High Peaks Trail Association, he spends most of his time these days up among the clouds, maintaining the route: whacking weeds and unclogging water boreholes to prevent flooding.

Blood lives in Burnsville, a homely town just north of the peak, and has long wondered why Mount Mitchell was never included in the area’s biggest attraction: the Appalachian Trail (AT). The epic 2,000-mile hiking route is so close by that he can point to a fire tower on its path.

“When Benton MacKaye laid out the trail 100 years ago, he intended to connect the two highest peaks in the east: Mitchell and Mount Washington, up in New Hampshire,” Blood says. “But he hadn’t considered all the private landowners around here, who fought it off.” Locals didn’t want a trail cutting through their land.

The Appalachian High Route is Blood’s way of finishing MacKaye’s job. Together with his neighbour — Jennifer Pharr Davis, a local adventurer who holds the record for hiking the AT, in less than 47 days (a typical “thru-hiker” would take six months, at least) — he found a clever back route unofficially linking Mount Mitchell to the peaks of the AT. When we meet he hands us a map, hot off the press, and traces out a six-mile circuit that will deliver us back to our car. 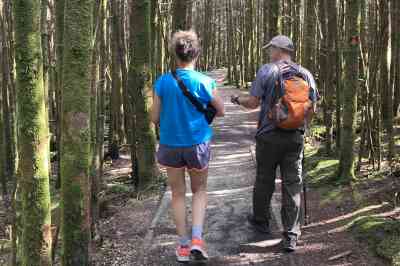 Blood is what he calls a “macro hiker”: he appreciates big views that trigger a “Wow!” reflex. I can see why he’s such a fan of Mount Mitchell. Sauntering ahead, brandishing a walking stick, he leads us to big-picture vistas in every direction: to the north, the Blue Ridge Mountains stretch out in an ascending scale of blues; to the west, clouds drift across the Great Smoky Mountains like wafts of smoke from a barbecue.

In his Appalachian drawl, Blood drops his aitches and “huge” becomes “yuge”, which describes the 10,000-acre expanse of uncultivated woodland, and the white scars on the landscape left by obsolete mines. The Great Smoky Mountains are also “yuge”, he says. With the Appalachian High Route complete, he can draw a line from them to here.

It’s a quick walk back to the car park from Mount Mitchell’s summit, but our journey has barely begun. One of the other highlights of North Carolina’s interior is the Blue Ridge Parkway, a scenic motorway built to dazzle with peak views all the way to Tennessee — and we’re keen to check it out.

To make the most of it my husband hires a Mustang convertible for the week. At £20 a day more than a standard saloon it’s a splurge. But after our first spin — Grateful Dead on the radio; wind in our hair — we don’t give it a second thought. We spend our first couple of nights in Marshall, an old drover’s junction on a river called the French Broad. It’s a nostalgic old town, all clapboard, vintage pick-ups and faded signs whispering of bygone hardware shops. From where we are staying, at the Old Marshall Jail Hotel, a road spirals into the Blue Ridge foothills. In the Appalachians you’re never far from a great hike.

Marshall was completely dry until 2008, when the economy tanked. And while spirits are still verboten, we hear good things about Mad Co, a new craft brewery in the old town hall. At the bar it’s not long before a regular offers us a taste from his glass — it’s that friendly here. We order two Marshall Pales and follow him to the riverside terrace, where we’re joined by the owner, Rhesa, and eventually everyone else. By closing time — a healthy 9pm — we’ve all exchanged numbers and promises to keep in touch.

From here we spend the rest of our trip exploring the region, using Blood’s map to pick out the Appalachian High Route’s most impressive climbs. By midweek we’ve decamped to nearby Hot Springs, a town where brew pubs outnumber traffic lights two to none. There’s a buzzy bingo game at Big Pillow Brewing that we join with mugs of El Guapo lager and, it seems, everyone in town. Out on the terrace a wizened guitarist covers Lynyrd Skynyrd’s back catalogue.

Our climb the next morning follows a gradual slope over the Pump Gap — close enough to our rustic lodge that we can leave the car behind and hike in full. Nearly two hours from Mount Mitchell, the landscape is lusher here, a forest of hemlock and hornbeam swarmed by kudzu, known locally as “the vine that ate the South”. There’s a sultriness to the air here — likely thanks to all the heavy breathing and sweat. Halfway to the summit, the Lover’s Leap Ridge spoils us with a view streaked by feathery clouds, like wisps from a Virginia Slim.

Our final stay is in Bryson City, a town straight out of the cult 1990s TV show Twin Peaks, where the Everett Street Diner serves mountain-fried steak, sausage gravy and Southern biscuits for breakfast. We’re welcomed in like old friends, and when the host gets wind of a birthday at the next table, he rouses the entire house: “Hey everyone, let’s all sing Happy Birthday to Peaches!”

Bryson City is the gateway to the Great Smoky Mountains range and its highest peak, Clingman’s Dome, which was recommended by Blood for its waterfalls and dizzying views. At 10am we park at the summit to take in the misty mountain panorama, then set out on a six-mile loop that takes us across the Tennessee state line. The forest up here is its own fragrant ecosystem of spruce and Fraser fir — more akin to Canada than the American South. The trees came down with the glaciers, aeons ago; when the glaciers retreated the bracing mountain climate suited them just fine.

About halfway along I start to hear cars darting past. This is near the spot where, Blood told me, you can cut and run: ring a taxi or head back, clean and dry, along the winding back road. But in the opposite direction, through the bare trunks of the conifers, I can see the undulating ridge of the Great Smokies and, beyond, the trickling Little River.

The view tugs at my feet; I’m starting to believe I belong up here on the trail. I get the feeling that, like Blood, I’m a macro hiker too. 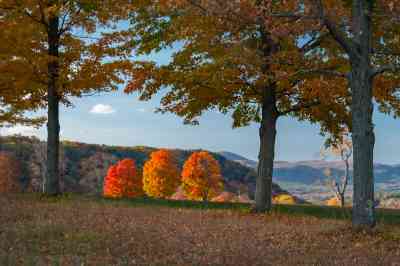 1. Art and microbrews
The Appalachian Trail extends as far as Mount Katahdin in Maine. Macs Adventure’s New England hike focuses on the Berkshires, the leafy highlands west of Boston. Its six-night, 31-mile Appalachian loop takes in the 3,491ft Mount Greylock, classic Massachusetts towns and the “purple valley” around Williamstown, named for the colour of the mountain landscape at dusk. Hike the trail from inn to inn and discover small-town New England life through its art, food and microbrews.
Details Six nights’ B&B on a portered trek from £1,525pp (macsadventure.com). Fly to Boston 2. Red rocks
From Monument Valley to Zion, America’s southwest has some of the most eye-popping scenery in the western hemisphere. In nine days you can tick off bucket-list treks starting at the Grand Canyon, climbing from its lowest to highest points. You can explore the belly of Bryce Canyon, then dip into Utah to circle the otherworldly red rocks of Arches National Park, and still have enough time left to try your hand at the slots in Las Vegas, via Route 66.
Details Ten nights’ room-only on a guided trek from £3,099pp (exodus.co.uk). Fly to Las Vegas 3. Gold Rush country
Shake up your California coastal holiday with a four-night detour into Lake Tahoe, Yosemite National Park and the Sierra Nevada. This tour with Intrepid starts with a hike on the Land’s End Trail in San Francisco before cutting across Gold Rush country to Yosemite for a trek on the Mist Trail, a tour of the giant sequoias and hikes surrounding Tahoe, the continent’s largest alpine lake.
Details Four nights’ B&B on a guided trek from £1,495pp (intrepidtravel.com). Fly to San Francisco


Read More: Getting high in the Appalachian Mountains