The European Union is facing a tough balancing act over how to deal with Russians fleeing military mobilization, as some countries look to block entry and others offer possible refuge.

Russian President Vladimir Putin’s order on Wednesday calling up hundreds of thousands to fight in Ukraine appeared to send droves of Russian men scrambling for the exit in a bid to avoid going to the front lines.

Flights to countries granting visa-free entry to Russians, mainly neighboring former Soviet republics, were nearly entirely booked up despite rocketing prices, and queues were reported at some borders.

So far, the numbers coming to the EU seem modest as the bloc had already curtailed travel from Russia by banning direct flights and toughening up visa rules in the wake of the invasion of Ukraine.

Finland — the only member that had kept its land border open with Moscow — reported that arrivals from Russia doubled to 6,470 the day after Putin’s announcement.

But despite the small scale, the issue is stirring debate in Brussels as EU members adopt starkly differing approaches to Russians looking to escape the fighting. 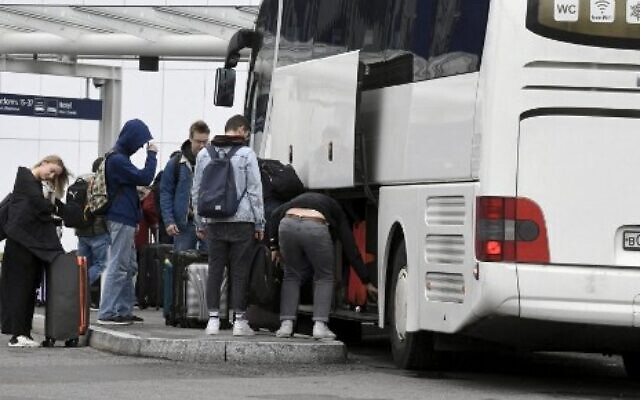 Passengers get off a coach coming from Saint Petersburg, Russia, after it arrived at the Helsinki Airport in Vantaa, Finland, on September 24, 2022. (Jussi Nukari/Lehtikuva/AFP)

The Baltic states and Poland — which had already gone further than others in the EU by drastically restricting entry for Russians with visas — are leading those taking a hawkish line.

“Many Russians who now flee Russia because of mobilization were fine with killing Ukrainians. They did not protest then,” Latvia’s Foreign Minister Edgars Rinkevics wrote on Twitter.

“There are considerable security risks admitting them and plenty of countries outside [the] EU to go [to].”

“That would be fundamentally contradictory to the aim of all our sanctions so far, which is the collective responsibility of Russian citizens,” he said.

Finland on Friday signaled that it was taking the same track by announcing it would “significantly restrict the entry of Russian citizens” after the uptick in arrivals that followed Putin’s decree.

At the other end of the spectrum, Germany signaled on Thursday that it may be ready to take in Russians fleeing conscription. Police officers detain a man at a protest against military mobilization, in Moscow, on September 21, 2022. (Alexander Nemenov/AFP)

“Anyone who courageously opposes Putin’s regime, and thereby falls into great danger, can file for asylum on grounds of political persecution,” she said.

The European Commission, the EU’s executive arm, said on Friday that it was “monitoring” the situation, amid calls for the bloc to issue guidelines to its 27 member states over how to tackle any arrivals.

EU ambassadors are set to be briefed on the issue at an urgent meeting on Ukraine on September 26.

The EU struck a landmark agreement in March to open its doors to millions of Ukrainians — mainly women, children, and elderly people — fleeing the Russian invasion.

But there is far less sympathy for the Russians — mainly young men — who could now seek a way out, even if some argue that not giving them an escape route will end up bolstering Putin’s war machine.

European diplomats warn that coming up with a common approach will be tough and the Commission appears reluctant to get involved unless the number of arrivals shoots up.

Immigration is a notoriously thorny theme in Brussels and EU nations fiercely guard their prerogative over the subject. 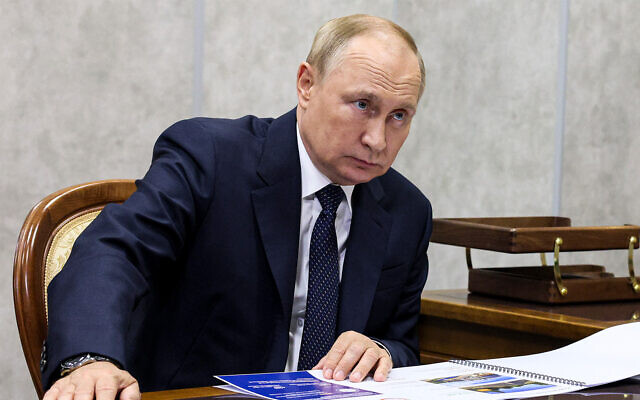 European law guarantees a right to claim asylum for people arriving in the bloc. But that is not automatically granted, especially if there is a security risk.

“This is an unprecedented situation,” EU spokeswoman Anitta Hipper said. “When we look at the situation at the moment in terms of security, we need to take these geopolitical concerns into account and the risks to our security as well.”

Outside of the EU, a stream of Russians flocking to Istanbul on Saturday expressed personal relief but concern for the safety of loved ones after the Kremlin’s announcement.

All those carrying hurriedly-packed belongings refused to give their full names for fear of retribution by Russian police against those still at home.

But all described anxiety not felt since the first days of Russia’s invasion of its Western-backed neighbor on February 24.

“We were talking to our friends and many are thinking about leaving,” said Daria, 22.

“Not everyone wanted to leave in February. The decision of September 21 forced many to think about it again.”

Her husband Andrei, 23, said he had been thinking of leaving since the first days of the war. 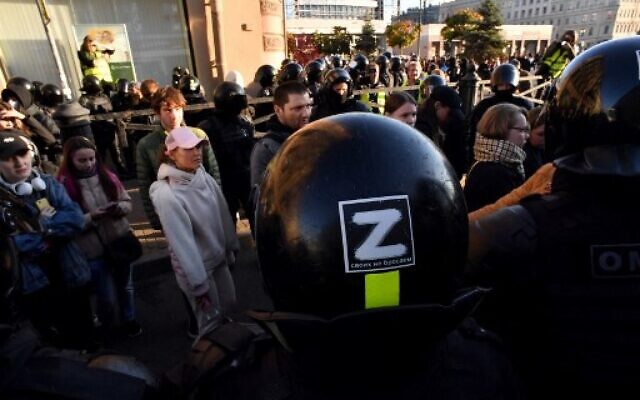 A police officer with the letter ‘Z’ on his helmet, the tactical insignia of Russian troops in Ukraine, as he blocks the street in Saint Petersburg on September 24, 2022, following calls to protest against the partial mobilization announced by Russian President Vladamir Putin. (AFP)

The mobilization was the last straw.

“A lot of people decided to leave right now,” he said.

But Andrei also worried that speaking to reporters might cause issues for his family and friends back home.

“Yes, I think that things I am saying to you now — I am worried that there might be some punishment for that,” he said, standing next to a huge suitcase.

“The laws [in Russia] are very loosely applied. If they want to, they will find a reason to punish you.”

We’re really pleased that you’ve read X Times of Israel articles in the past month.

That’s why we started the Times of Israel ten years ago – to provide discerning readers like you with must-read coverage of Israel and the Jewish world.

So now we have a request. Unlike other news outlets, we haven’t put up a paywall. But as the journalism we do is costly, we invite readers for whom The Times of Israel has become important to help support our work by joining The Times of Israel Community.

For as little as $6 a month you can help support our quality journalism while enjoying The Times of Israel AD-FREE, as well as accessing exclusive content available only to Times of Israel Community members.

Thank you,
David Horovitz, Founding Editor of The Times of Israel

Already a member? Sign in to stop seeing this

Replacing your iPhone’s battery is about to become more expensive