The now-local fighter has fulfilled his dream of a continental belt.

The Kildare man, who now lives with his family in Co. Louth, came out on top of a terrific contest at the city’s Europa Hotel.

It prompted protests from the French corner, after what was a very even contest between El Hadri and ‘Lilywhite Lightning’. 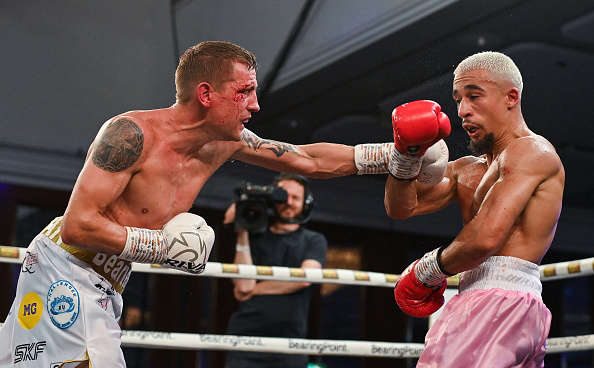 Donovan lands a strike on his French opponent (Getty Images).

Donovan, who’s hails from Athy, has been in boxing for 30 years since first joining the town’s St. Michael’s Boxing Club as a child.

He came to the professional circuit late in his career after a very successful amateur career, which saw him five Irish Elite titles, as well as bronze medals at both the European and EU Championships.

After last night’s win, the southpaw was visibly emotional at finally claiming a continental title as he was joined by his wife Laura – the current Head of Women’s Football at Drogheda United – and their sons, Troy and Jack.