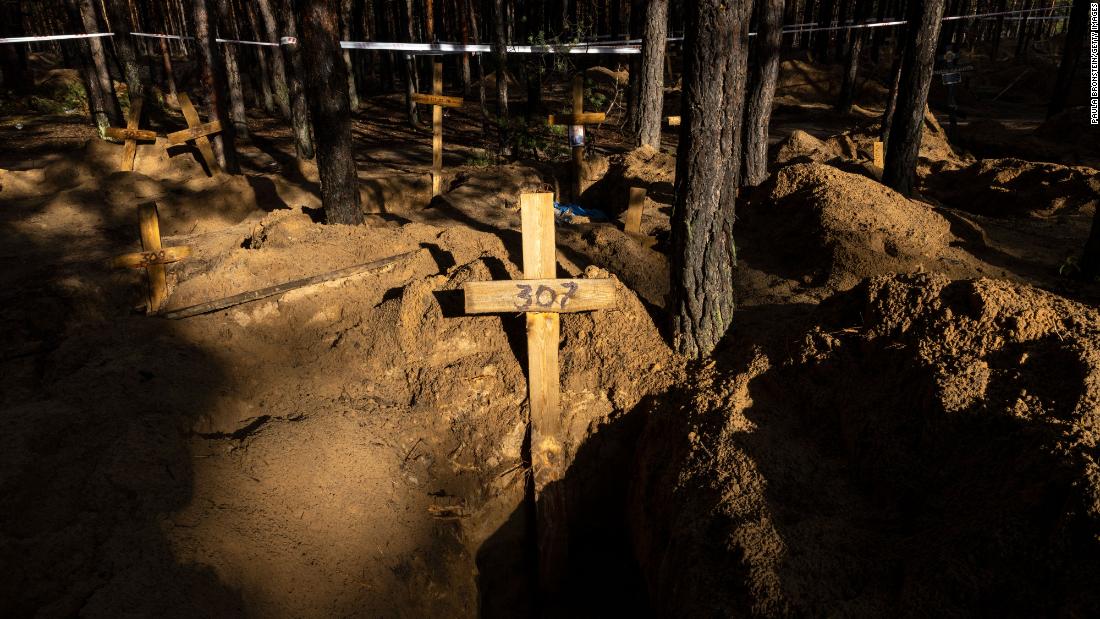 In a gruesome reminder of the human cost of Russia’s invasion, most of the bodies showed signs of a violent death, said Oleh Syniehubov, head of the Kharkiv region military administration.

“There are bodies with a rope around the neck, with hands tied, with broken limbs and with gunshot wounds. Several men had their genitals amputated,” Syniehubov said in a Telegram post on Friday.

“All this is evidence of the terrible torture to which the occupiers subjected the residents of Izium.”

Syniehubov added that most of the bodies were civilians and only 21 were military.

Izium, which sits near the border between the Kharkiv and Donetsk regions of Ukraine, was subject to intense Russian artillery attacks in April before it was occupied. It then became an important hub for the invading military during five months of occupation.

Ukrainian forces took back control of the city this month, delivering a strategic blow to Russia’s military assault in the east.
Russian forces were forced to flee the strategic eastern city after Ukrainian forces began a new offensive eastward through the Kharkiv region.

While Ukraine’s offensive successfully regained thousands of square miles of territory, it also uncovered evidence of the horrors suffered by civilians and soldiers at the hands of Russian troops.

Syniehubov said this wasn’t the only mass burial ground that had been discovered. There are at least three more in other liberated areas of the Kharkiv region, he said.

He added that each of the bodies recovered has a separate story, and he vowed to find out the circumstances of each of their deaths “so that their relatives and friends know the truth and the killers are punished.”

“All crimes of the occupiers will be documented, and the perpetrators will pay for what they have done,” Syniehubov said.

He thanked the 200 people — including forensic experts, police officers, and employees of the State Emergency Service — who had been working there everyday for their “morally difficult but necessary work.”