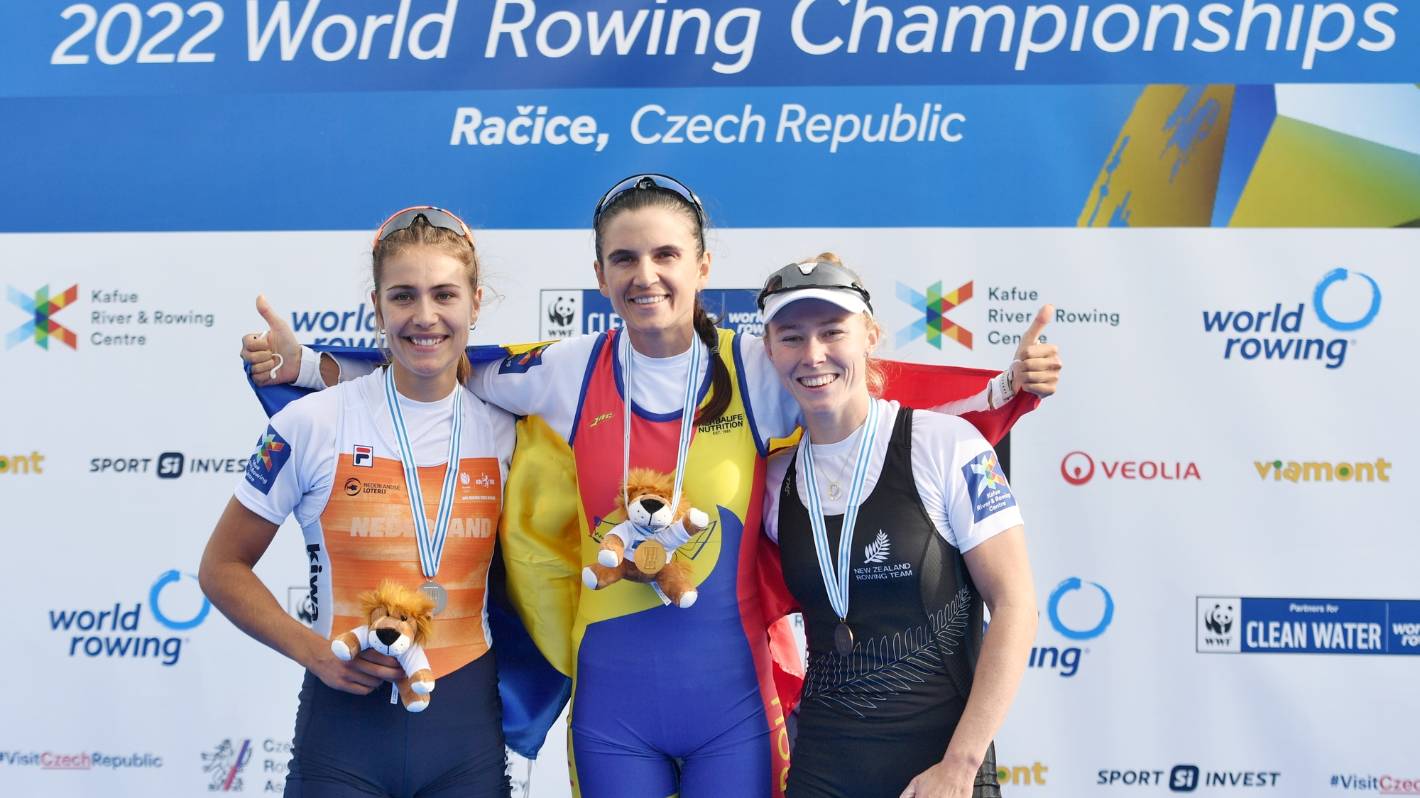 New Zealand’s Jackie Kiddle, right, is delighted with her bronze medal at the 2022 World Rowing Championships, with winner Ionela Cozmiuc of Romania, centre, and silver medalist Martine Veldhuis of the Netherlands, left.

A year after missing out on competing at the Olympic Games, Jackie Kiddle has won a world championship bronze medal.

The New Zealand rower finished third in the lightweight women’s single scull A final overnight in Racice, Czech Republic, giving her country their first medal of the 2022 regatta.

Kiddle was half of the NZ lightweight double crew named to contest the Tokyo Olympics last year, but when Zoe McBride retired months before the Games, Kiddle was left without a crewmate of the necessary quality and the boat entry was withdrawn.

The 28-year-old, who won world championship silver with McBride in 2017 – and gold in 2019 when the regatta was last held before Covid-19 brought about the cancellation of the scheduled following two events – led at the halfway stage before finishing behind winner lonela Cozmiuc of Romania and silver medallist Martine Veldhuis of the Netherlands.

It’s been a taxing regatta for Kiddle, who will also contest the lightweight double B final at the weekend with Rachael Kennedy.

Illness prevented Twigg, 35, from competing in the World Cup regattas earlier this season but she has looked sharp in Racice and primed for a showdown with emerging star Karolien Florijn of the Netherlands. The 24-year-old has won two World Cup titles and a European Champs gold in her first senior season.

New Zealand men’s single sculler Jordan Parry has made the vast improvement he was aiming for in qualifying for the A final.

Parry struggled in his first senior international outing in the boat at the Tokyo Olympics but has kept pace with the elite this week and was third in his semifinal behind defending world champ Ollie Zeidler of German and Great Britain’s Graeme Thomas.