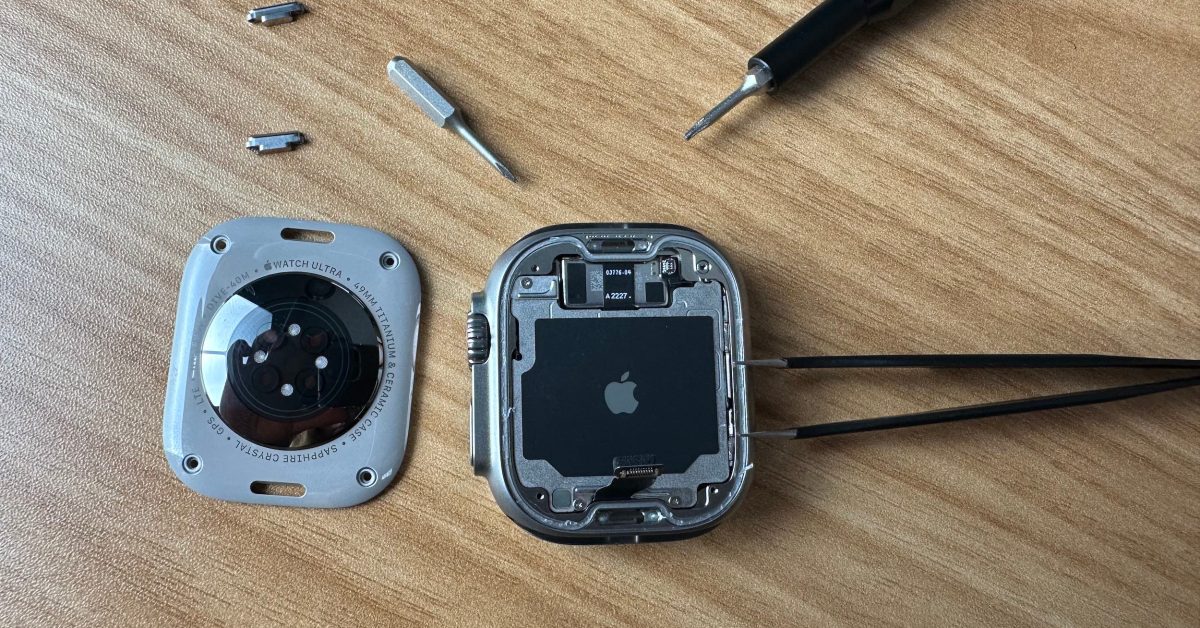 The Apple Watch Ultra has just started arriving in customers’ hands, and unlike previous Apple Watches, it has four exposed screw heads on the bottom of the device. I like taking a look inside my tech, whether to add a thermal pad to an M2 MacBook Air to improve performance or just to see what’s inside making the tech work. The moment I saw the screws on the bottom of the Apple Watch Ultra, I knew I wanted to take a peek inside. But I probably shouldn’t have …

The bottom of the Apple Watch has four P5 pentalobe screws. These are the same sort of screws that hold on the bottom of MacBook, and while they aren’t as common as a Philips or flathead screwdriver, pentalobe screwdrivers aren’t uncommon either. After I took out those four screws, the first complication arose – there is a very tiny o-ring around each screw. These are, no doubt, part of the extreme waterproof ratings of Apple’s high-end smart watch. As I went to screw back in those initial four screws, it proved nearly impossible to tighten them without the o-ring partially slipping out of its place.

Nonetheless, I carried on, well aware at this point that some of the waterproofing of the watch could be compromised. With those screws out, the only way to continue was using a spudger and thin shims to separate the ceramic back of the watch from the titanium casing. It was well sealed, and the moment it pulled away that thin waterproofing was destroyed. In addition, there are two thin ribbon cables connecting the back of the watch, and all of its health sensors, to the battery, screen, processor, and body of the watch. I had to be careful while separating the two to avoid damaging the cables.

Taking off the back panel didn’t reveal too much of the internals. There was a large black component with an Apple logo, but the two buttons used to release the Apple Watch bands came out, and three of the four springs disappeared into the abyss of my carpet.

With the back panel of the watch removed, there wasn’t any sort of immediate error from the watch, but it, understandably, couldn’t connect to my phone. There were three more screws – this time tri-wing – and small metal plates holding down that black component, but once I removed those and began to lift it, it became clear that it was a bit too big of a task. There seemed to be multiple ribbon cables connected to the other side of it, and from the back side of the watch, there didn’t seem to be a good way to disconnect them. Getting to those probably involves removing the display by softening the adhesive and then using an opening pick to separate it. That’s how you could access the internals on previous Apple Watches, but the seam of the display on the Ultra didn’t seem to have a great way to open it that I was confident I could do without cracking the display. The display of the Apple Watch Ultra is sapphire, which, while more scratch resistant, is potentially more prone to cracking. That’s probably part of the reason Apple extended the metal body of the watch up around the flat sides of the display.

At that point, I put everything back together as well as I could. It proved rather difficult to reattach the two ribbon cables connected to the bottom of the device. The buttons to remove the watch band, now lacking some minuscule springs, rattle with the watch’s haptics. And, the little rubber o-rings around the screw stick out a bit. With the o-rings out of place and the adhesive seal broken, the waterproofing of the watch is certainly nowhere near its factory standards. I certainly wouldn’t take it scuba diving at this point.

No doubt, in the coming days we’ll see a more complete teardown of the watch from the people of iFixit. They’ll certainly venture farther into the Apple Watch Ultra than I did. I’m sure someone more skilled than I could do a better job disassembling and reassembling the watch without as much damage to the waterproofing, but alas. I would certainly recommend waiting for their guide to feed your curiosity, rather than taking apart your own watch, as otherwise you could be left with a non-waterproof (or, even worse, a broken) version of Apple’s most durable smart watch yet.

Check out 9to5Mac on YouTube for more Apple news: