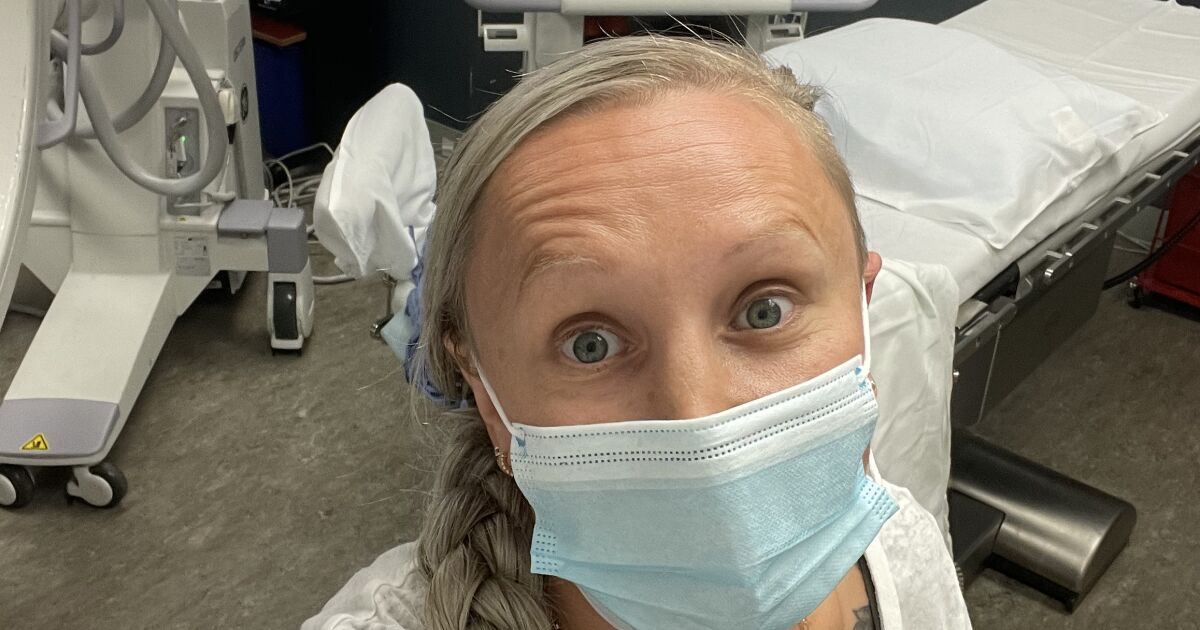 Walking through a consignment store, Kaillie Humphries and husband Travis Armbruster found themselves standing in front of a crib. It seemed perfect. They’ve dreamed about a family. They’ve planned for it.

To Humphries, an Olympic gold medalist in bobsled for her native Canada and the United States with three in all, the strength to bludgeon mental obstacles in a sport where haves and have-nots are determined by the hundredth of a second made her elite.

The most recent gold, February in Beijing, came after a bitter breakup with Team Canada centering on a coach Humphries said was verbally and mentally abusive. It came after an exhausting, financially taxing citizenship fight to compete for the U.S. that led to her passport arriving just two weeks before a frenetic deadline.

“I’m not putting that out in the universe yet,” said Humphries, 37. “There are times when you think, this isn’t going to happen. The fear creeps in. You don’t want to jinx anything.”

An x-ray for hip pain three years ago revealed a cyst, leading to a diagnosis of endometriosis. The Mayo Clinic defines the genetic condition as “an often painful disorder in which tissue that lines the inside of the uterus … grows outside” it.

Endometriosis can wreak havoc, pushing onto and into other areas of the reproductive system and beyond. It creates painful scar tissue and can impair fertility in as many as half of women with the condition.

“You think, are we broken?” Humphries said. “Do you keep it secret? Is it shameful?”

A ticking biological clock can loom like a gathering storm cloud over prospective parents. For someone in the wholly unique situation of Humphries, juggling the endless demands of being a world-class athlete can tighten timelines and spike stress.

When Plan A’s head for the exits, it’s one thing. When the uncaring whims of human physiology throw up a bright red stop sign, it’s a gut punch.

“At first, it’s denial,” said Armbruster, a former member of the USA bobsled team. “Then you go into things like getting angry about it. This isn’t fair. Then you start to bargain about it. Hey, maybe this isn’t our path. You go into that problem-solving mode. You move on to another plan.”

That plan became IVF, or in vitro fertilization. It’s a complex and expensive laboratory assist, where an egg is fertilized outside of the body for those who struggle with conception.

Daily injections, Humphries said, can continue for more than two weeks, expanding ovaries in hopes of harvesting as many eggs as possible.

Suddenly, one of the strongest and most well-conditioned athletes in the world, who pushes and pilots 375-pound sleds for a living, was forced to slam on the brakes.

“You’re at risk of twisting your ovaries when they’re that large,” Humphries said. “You can cut off blood supply and that could be permanent damage. So you’re not allowed to work out. I couldn’t lift anything over 10 pounds, nothing twisting, no strenuous exercise for two weeks before and a week after for each cycle.

“It was a mental shift, for sure. It’s drastically different, going from the extreme athlete to ‘Don’t do anything.’ ”

The financial burden can be crushing. Bobsled is not one of the corners of the Olympic universe where top stars end up on Wheaties boxes, couch surf the late-night talk show circuit or ink massive endorsement deals with Nike or Ralph Lauren.

Two rounds of IVF have cost Humphries and Armbruster $24,000 so far.

“That’s my yearly salary, my Team USA stipend,” Humphries said. “That’s just to get to the egg retrieval stage. That doesn’t include implementation, the egg freezing and all of the genetic testing that’s required. That will be tens of thousands more.

Armbruster cut through the tricky decision-making.

“You do things you’re told not to do financially, putting things on credit cards,” he said. “Would a financial advisor tell you this is a good idea? I doubt it. You do what it takes, whatever it takes.”

The first round of IVF took place in Texas last May, with 49 eggs producing three viable embryos. To increase the chances of success, doctors recommended another egg-retrieval lap that took place in San Diego last month — producing 21 eggs, of which seven were deemed viable.

The couple will delay implanting the embryos so Humphries can compete in the upcoming bobsled season. That allows her to continue her career without a points penalty while building in a recovery period after a summer that involved hormone injections and two surgeries to remove eggs.

“I can only take one season off to maintain my career status with the international federation,” Humphries said. “If I plan to be pregnant, I’d rather it be next season than this season, knowing we’ve got races in North America this year in Canada and two in the U.S., which we haven’t had in two or three years.”

The swirl of all those worlds colliding is exhausting. The couple trusts in steel hardened by the fight with Canada, navigating the American citizenship minefield and backgrounds in international sports.

“It’s testing our faith, our strength, our patience and everything,” Humphries said. “Is this the easy way? No. Have we been through this? Yes. Can we get through it and be successful? One hundred percent yes.”

Humphries sees herself as part of a broader conversations about top women’s athletes, family planning and perceptions in a very unique workplace. Stars such as Serena Williams, Allyson Felix and San Diego Wave FC’s Alex Morgan demonstrate that starting a family does not require walking away from careers.

Dusty thinking, all of it.

“For years you’re told, you can’t be good at both,” Humphries said. “It’s going to take your focus away from sport. Or your body can’t recover and you’re never going to get in the shape you were before. You give up a lot of your prime reproductive years as a female to focus on sport, but those women are proving that’s not correct.

“You can come back and be just as successful. You can balance family life and sport life. You don’t have to give up one or the other. We’re going against generations of this mindset.”

Even though Humphries continues the fight to slay her own physical and financial dragons, she casts an eye to the future of others. She discovered BabyQuest Foundation, a program that offers financial aid for couples going through the IVF process. She hopes to raise awareness of the help for families who wade through bouts of hopelessness.

Humphries, who is not a grant recipient through the program, said learning about the group sparked ideas.

“I’d like to start my own grant for athletes in this scenario, because it’s not funded by Team USA or insurance,” she said. “I’d like to help offset the costs for women’s athletes and their families.”

As Humphries begins her return to bobsled, some of her hardest and most taxing work already has been done. The eggs sitting in a freezer could represent the most monumental victory of her life.

Asked whether the couple has talked about possible names, nervous grin emerged on Humphries’ face.

“I’m not going to buy baby clothes or discuss names until we’re actually pregnant,” said Humphries, who is targeting one more Olympics, the 2026 Games in Milan and Cortina, Italy. “I updated a list of names on my phone, but we’re not really talking about it right now.

“It’s like calling yourself an Olympian before you’re an Olympian. You just don’t do that.”

They already know where to find a crib.