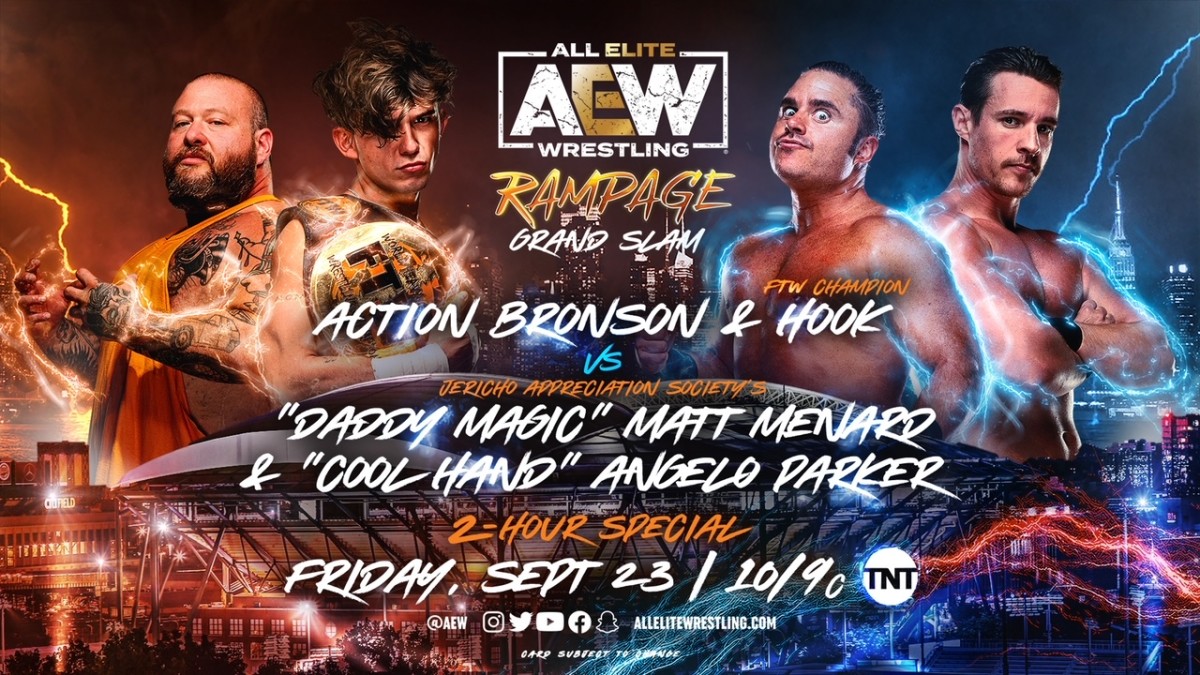 A new World title challenger will be crowned in a Golden Ticket battle royale with the winner to face AEW World Champion Jon Moxley in October.

TBS Champion Jade Cargill will look to remain undefeated when she defends against Diamante.

In a trios of grudge matches, Sting & Darby Allin will face Brody King & Buddy Matthews in a no DQ match; Eddie Kingston will face Sammy Guevara; and Ricky Starks will face Powerhouse Hobbs in a lights out match.

All and Sting snuck up behind The House of Black as they made their entrance and attacked. King press-slammed Allin into the ring while Sting brawled with Buddy Matthews while Julia Hart was on his back. After much brawling in and around the ring, Sting took on both members of the House of Black in the ring 2-on-1, Sting hit Matthews with a Stinger Splash, then avoided a charge from King (who charged into Matthews). King set up Sting for a superplex, but Allin broke that up with an avalanche Code Red on King for a near fall.

Allin went for his high speed plancha on Matthews, but Matthews cut him off with a knee. Sting knocked Matthews off of the apron on to a table. King charged into Sting and sent him crashing through a pair of tables. Hart and King handcuffed Sting in the ring.

During the split-screen break, The House of Black brawled with Allin up the ramp way while Sting was handcuffed in the ring. They went for Dante’s Inferno, but Allin countered. Allin climbed up one of the lighting structures on the entrance stage and delivered the Coffin Drop onto Matthews from a good ten or twelve feet up. Allin went for a Coffin splash on King, but King caught him with a choke, and eventually both Allin and King tumbled off the stage and through a table.

Julia Hart led Matthews (holding Sting’s bat) back to the ring, where Sting was still handcuffed and bleeding from his forehead. Matthews set up Sting on a chair to strike him with the bat when the lights went out. When they came up, The Great Muta arrived to save Sting! Muta made his entrance to a huge ovation to the crowd. Muta and Sting had a brief staredown, then Muta turned to Matthews and took him down with a dragon screw leg whip. Muta sprayed Matthews with the green mist, which sent him flying back into Julia Hart on the apron. Hart went flying backwards and “through” a table that she actually completely missed, and she landed backfirst on the floor (she mostly missed the mats at ringside, too). That couldn’t have been fun at all. Judge how bad it was for yourself here, about 1:45 into the video clip.

Sting broke free of the handcuffs and dropped Matthews with the Scorpion Death Drop to get the three count. Seeing Muta and Sting in the ring together was a great moment. They shook hands and embraced.

After the match, a bloodied Darby Allin was briefly shown being tended to by doctors.

Bronson looked winded singing the entrance music for Hook as they walked to the ring, but he still got a pretty big pop from the crowd. Or maybe that was just for Hook. Taz was on commentary for this match.

Hook started with Parker and was on the wrong end of a gutwrench suplex. Menard got the tag and demanded Bronson. Bronson happily obliged, and took Menard down with a tackle, then crushed both Parker and Menard with an avalanche in the corner. Parker ran in and hit Hook from behind with a kick. The heels took control and Parker actually got a two count on Hook. Hook sold more than he ever had before and Menard also got a near fall. Parker went for a suplex, but Hook countered with his own suplex and got the hot tag to Bronson.

Bronson hit an Oklahoma Stampede powerslam and took both Menard and Parker down with shoulder tackles. Hook came in and hit a suplex on Parker then locked on the Redrum. Menard tried to run in and Bronson caught him in the Redrum as well, and both men tapped out.

Sterling cut a promo on the house mic and talked about how he definitely wouldn’t be powerbombed tonight.

Warldow and Woods fought in the ring while Nese and Joe battled on the floor. Wardlow clotheslined Woods over the ropes and followed him out, tweaking his knee. Joe and Nese battled into the ring, and Joe avoided a moonsault from Nese. Joe caught Nese with an uranage, then delivered the Muscle Buster to get the pinfall.

Nese and Woods jumped Joe after the match, but Wardlow made the save. Sterling hit Wardlow from behind with one of the title belts, which Wardlow no-sold. Sterling tried to run, but Joe cut him off and Wardlow gave Sterling three movements of the Powerbomb Symphony. Fun squash.

JR called him “Jungle Boy” Jack Perry enough times that someone finally realized how much better that name is. It only took 3 years!

The first few minutes of the match took place during the split-screen break. After the break, Jungle Boy hit a lariat and a brainbuster for a near fall. Jungle Boy evaded a hook kick, then hit a superkick and a poisoned rana. Fenix came back with a jumping stunner and both men were down.

After the match, Perry and Fenix shook hands. As Jungle Boy celebrated, Christian Cage came out with his arm in a sling. While Perry looked at Cage on the stage in a rage, Luchasaurus attacked Perry from behind. Luchasaurus laid out Perry and Cage cut a promo on the New York fans and Perry. Luchasuarus chokeslammed Perry and Cage told not to show up in AEW next week.

– In a pre-taped segment, Alex Marvez interviewed new ROH Champion Chris Jericho and the JAS to celebrate Jericho’s 8th world title. There will be a championship celebration on Dynamite next week. Daniel Garcia had something to say to Jericho, but Jericho told him to save it for the celebration.

Guevara grabbed the house mic to tell Kingston he was a fat piece of sh!t and Kingston flew off the handle, gouging at Guevara’s eyes. They brawled on the floor where Kingston dominated. Kingston setup Guevara for a piledriver on the apron, but Guevara backdropped him out of it and caught him with a punt.

… except, Kingston refused to let go of the hold. Jerry Lynn came out to try and reason with Kingston, but he wouldn’t listen. After security and other referees couldn’t get Kingston to break the hold, senior referee Paul Turner came out and reversed the decision, giving Guevara the victory. On commentary, Tony Schiavone informed that Tony Khan challenged Paul Turner to tighten up the officiating after some controversial calls on Dynamite Wednesday.

Diamante went for a crossbody to the floor on Cargill, but Cargill caught her and gave her an F5 into the ring apron. Back in the ring, the Jaded slam got Cargill the pinfall. After the match, Trina slapped Diamante and celebrated with Cargill.

Adam Page was the first man to enter the ring for the Battle Royal, but he was jumped by the Butcher, the Blade, and Rush on his way to the ring. More men entered the fray and the show went to commercial. During the split screen break, they showed several men brawling around the ring.

Penta eliminated Ari Daivari of the Trustbusters right off the bat. The Best Friends eliminated Cole Karter. Danhausen tried to curse QT Marshall, then Page and Danhausen cloheslined Marshall to the floor. The Butcher and Blade eliminated Danhausen.

Dante Martin got dumped to the ramp (which counts as an elimination) by Brian Cage. Cage then knocked Dalton Castle off the apron, but the Boys (not in the battle royal) caught him and helped him back into the ring. Castle then dumped Cage to the floor when the Boys distracted him.  Lance Archer clotheslined Trent Beretta to the floor, Daniel Garcia eliminated Castle, and Lee Moriarty eliminated Garcia.

Dark Order #10 was eliminated during the commercial break. (There must have been some other eliminations during the break as well.) Matt Hardy eliminated Blade and celebrated with Private Party, then the Butcher eliminated the three of them.

Evil Uno was eliminated. Page eliminated the Butcher. Rush and John Silver exchanged blows in the ring, and Rush dumped Silver. Penta got Archer over the top rope, then knocked him to the floor with a kick. Penta tried to dump Jay Lethal, but Satnam Singh caught him and tossed him back into the ring. Lethal eliminated Penta, and then Adam Page eliminated Lethal.

This left Adam Page and Rush as the last two men in the ring. Page tried to rana Rush over the ropes and almost hit the floor, but he saved himself. Page and Rush exchanged hard chops on the apron. Rush set up a piledriver on the apron, but Page countered and dropped Rush with the Deadeye. Rush fell to the floor, giving Page the victory.

Adam Page will now face the AEW World Champion on the October 18th episode of Dynamite.

Ricky Starks defeated Powerhouse Hobbs in a Lights Out Match (11:52)

Hobbs caught Starks with a neckbreaker and started throwing furniture into the ring. He threw a table onto Starks in the ring, then hit him with a chair. Hobbs continued throwing furniture into the ring during the split-screen break. Hobbs and Starks whipped each other with Justin Roberts’ belt, and Hobbs got a near fall with a sit-out spinebuster.

Starks sent Hobbs into a chair and caught him with a tornado DDT for a near fall. Starks went for a chair but Hobbs caught him with a low blow. Hobbs set up some chairs, but Starks caught Hobbs with a low blow of his own. Starks then repositioned the chair and went for the Roshambeaux, but Hobbs backdropped Starks onto the chairs (so his back landed on the top of the set up chairs). Hobbs powerslammed Starks onto the pile of steel chairs for a near fall.

I hope this win is the start of a huge push for Ricky Starks. He is seriously talented.

Jon Moxley v. Juice Robinson in a Championship Eliminator match was announced for Dynamite during the main event, along with interviews from Saraya and MJF.

The first 45 minutes or so of this show just flew by, but then it really dragged in the middle. The show picked up with the end of the battle royal and the main event.

Definitely the best episode of Rampage in a while, with the Jungle Boy v. Rey Fenix match as the definite highlight.