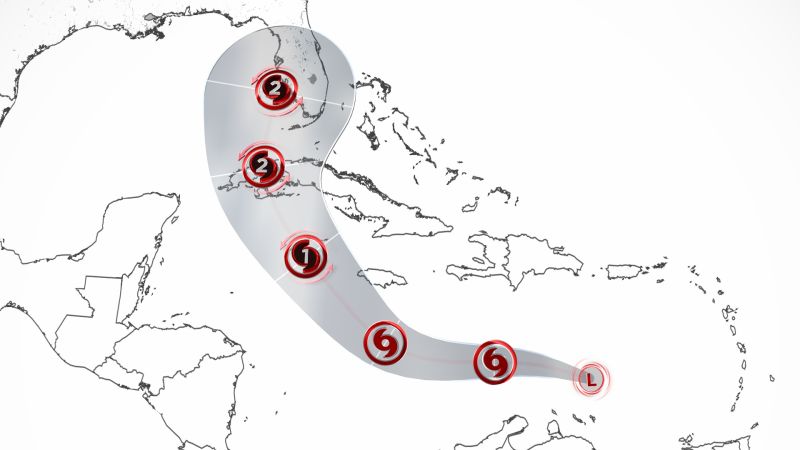 Tropical Depression Nine formed early Friday morning over the central Caribbean Sea and will likely become the next tropical storm – named Hermine, according to the National Hurricane Center.

This system has meteorologists’ attention because both the American and European weather forecasting models show it developing into a hurricane and entering the Gulf of Mexico early next week.

Nine has sustained winds of 35 mph about 615 miles east-southeast of Jamaica, tracking west-northwest at 13 mph.

In the short term, Nine is forecast to bring heavy rain to Aruba, Bonaire, Curacao, northern Venezuela and northern Colombia which could lead to flash flooding and mudslides across the islands.

The system is then forecast to gain strength, intensifying into a tropical storm as it tracks toward Jamaica and the Cayman islands. Tropical storm watches and warnings are likely to be issued for these locations within the next 24 hours.

After passing through the Caribbean this weekend, the system is forecast to track near or over western Cuba as a hurricane and enter the Gulf of Mexico early next week.

“The model guidance early on is in fairly good agreement, but larger across-track spread begins to take shape by 48 hours,” the hurricane center said. “There is still a healthy amount of uncertainty in the track forecast at the day 4-5 time frame.”

The official forecast track from the hurricane center splits the difference between the weather forecast models, showing the storm approaching the Florida peninsula late Tuesday night or early Wednesday morning as a strong Category 2 hurricane.

Regardless of where the storms ends up tracking, conditions in the Gulf are favorable for the system to strengthen, and it will do that very rapidly, Maria Torres, hurricane center spokesperson, told CNN.

Now, a week past the peak of hurricane season, the tropics seem to have woken up, and forecasters are concerned people have let down their guard.

“People tend to lower their guard and think, oh, yeah, we’re out of the woods,” Torres said. “But in reality, the season continues. We are still in September; we still have October to go. Anything that forms over either the Atlantic or the Caribbean is something that we need to keep monitoring very closely.”

No matter what, if you live in the Caribbean, Florida and other states along the Gulf Coast, pay attention to the updated forecasts this weekend into early next week.

Read More: Tropical Depression Nine forms in the central Caribbean and will strengthen to a hurricane